The C7 was sent before there was any reference anywhere on the internet about this particular model. It was shipped in a normal brown carton box and not product packaging. Just before publishing this review the details were available on their website, so I could add some of the details.

Most people who own Fenix flashlight know about the E-series, PD-series, TK-series, etc. But this is the first flashlight in Fenix’s C-series I encountered. A new category? I’m not 100% sure yet what kind of category this is, but I found out there is a C6 as well, but not available in the US, or EU. I found the C6 v3 available in India.

From the bottom (tail) up to the head, this light looks similar to the Fenix E35 V3 we reviewed earlier. It’s only the size and shape of the head (and switch) that look different.

The C7 was shipped without any original packaging or accessories, so keep in mind that the final product will have all that, but this is what I personally received:

Update: Fenix added the C7 to their website. This is what you can get besides the things mentioned above: 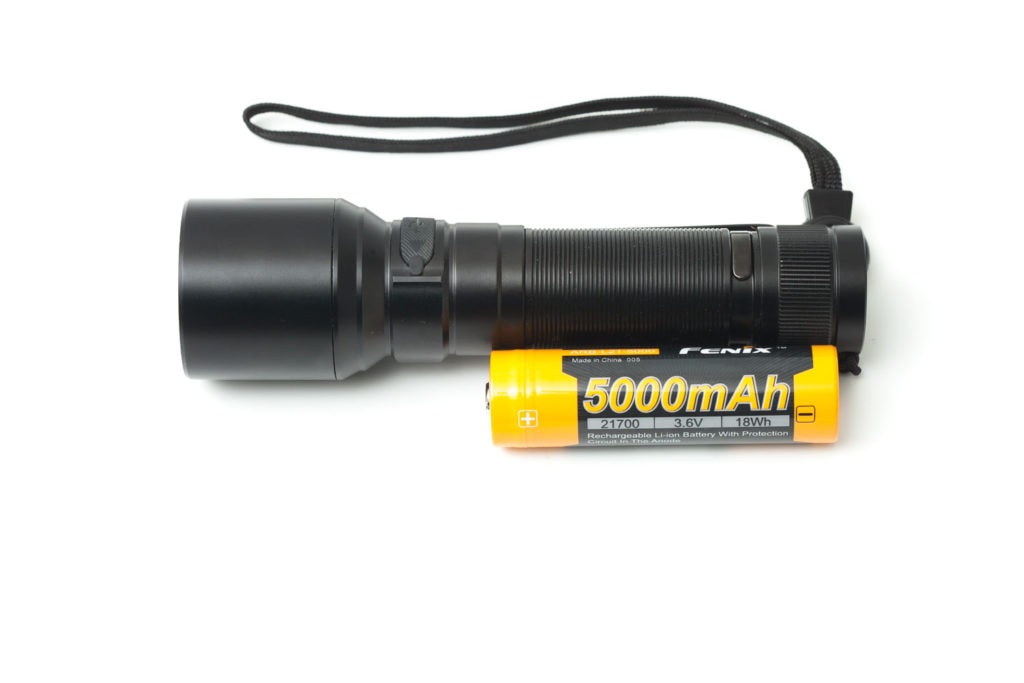 There’s only a single switch, so you don’t have to change hand position (upper/underhand) for power and changes modes. Just grab it, and use it as you wish, single-handedly.

The switch is located just below the head and has a grey rubber cover. There’s a little indicator LED, which will only show when the light is and is, therefore, hard to find just by the feel.

If you want, you could probably add some glow-in-the-dark sticker, or position the pocket clip in the direction of the switch. There are tricks to get around this, but it would be helpful to have a switch that can be found easier in the dark.

There’s a few ways of carrying/using the Fenix C7. There’s a pocket clip, a lanyard, and it has a magnetic tailcap. And there’s always some holsters you can get, separately. And since the tailcap is flat, you can use it tail standing, like a candle, without any problems.

When the tailcap is tightened the lanyard almost sits in line with the switch, so if yours is the same, that could help to locate the switch in the dark. 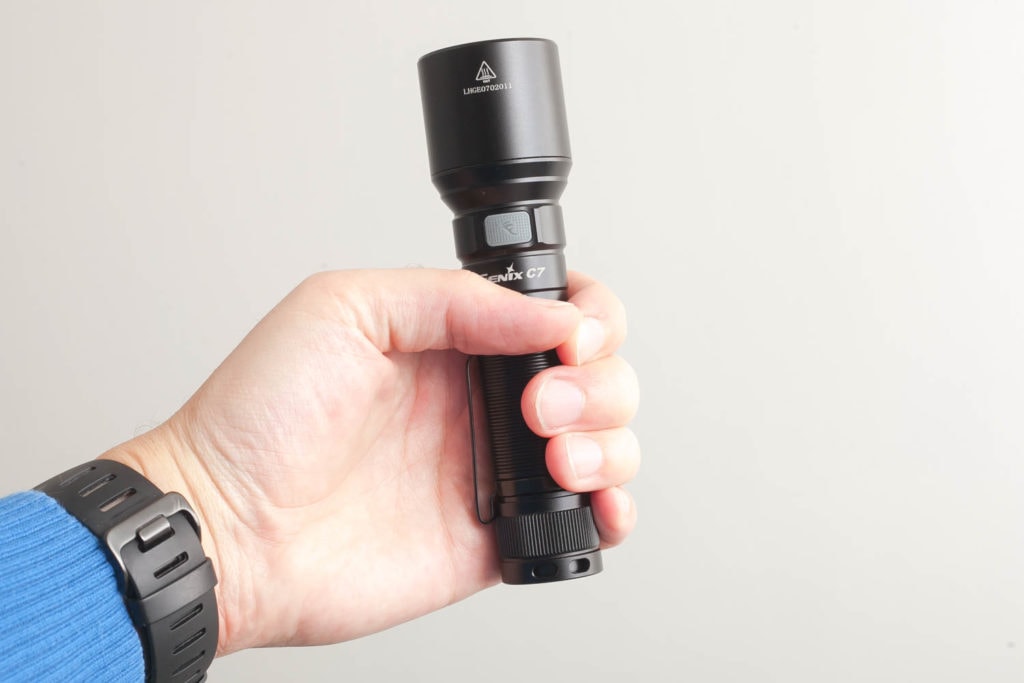 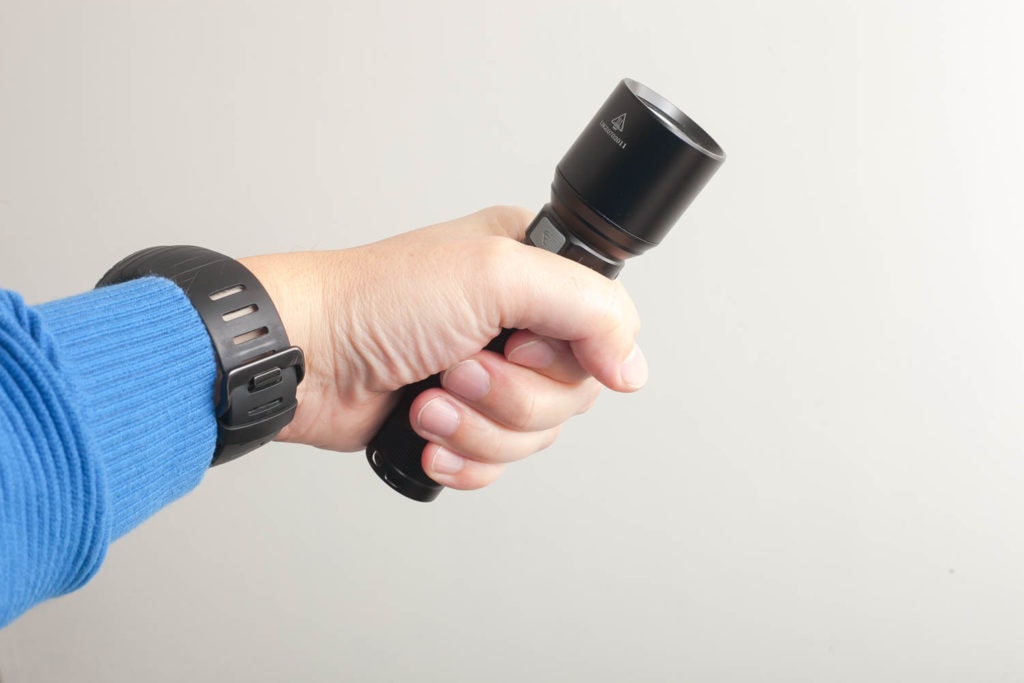 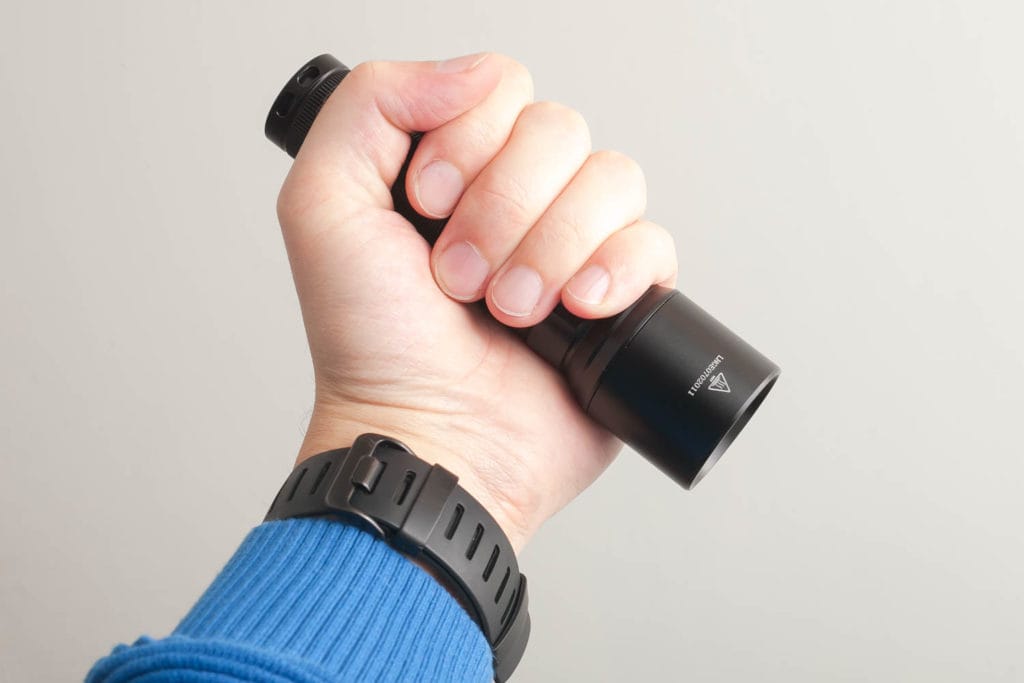 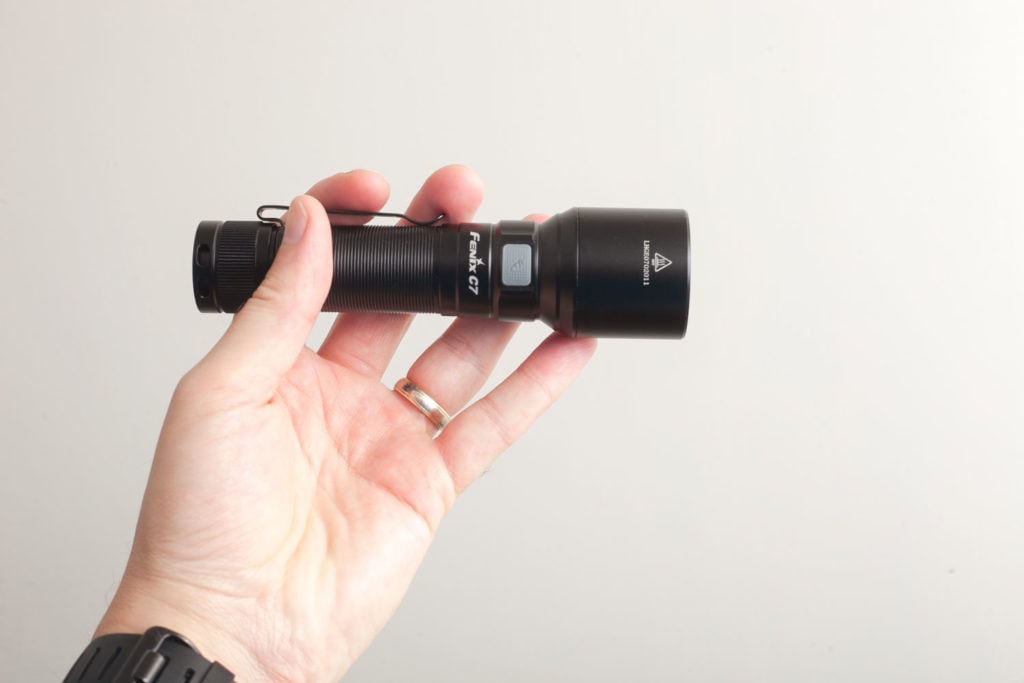 Fenix flashlights have been around for many years, so they know how to build high-quality products. And the C7 is no exception here.

There’s only 1 thing you can unscrew, and that’s the tailcap. You have to make 6 full turns to remove the tailcap, and it is protected with a rubber o-ring and lubrication to keep the water out. Lubrication also helps to make unscrewing the tailcap go as smooth as butter. And when you unscrew and remove the tailcap, you will automatically pull the battery out because of the magnet in the tailcap.

One thing that I’m not too great of a fan of is Fenix’s anodization. I’m not saying it’s low quality, because that’s not true. I’m talking about the finish. The anodization has a bit of a shiny finish, and I personally prefer a softer look with a more matte finish. Again, that’s just my personal opinion, and you may actually love the anodization.

There’s very fine redding, all around the body, and some redding on the tailcap to remove the tailcap more easily. This type of machining and finish is typical for Fenix and is kind of a branding feature. You can ‘see’ if it’s a Fenix flashlight by looking at the design, redding, etc.

That’s usually something that newer brands have difficulty with. They use any kind of design and features that aren’t unique, and therefore it won’t help their branding.

Fenix has a generous warranty, where they provide lifetime warranty against any defect in material and workmanship.For more detailed information, please check in the "Support" section of their website. 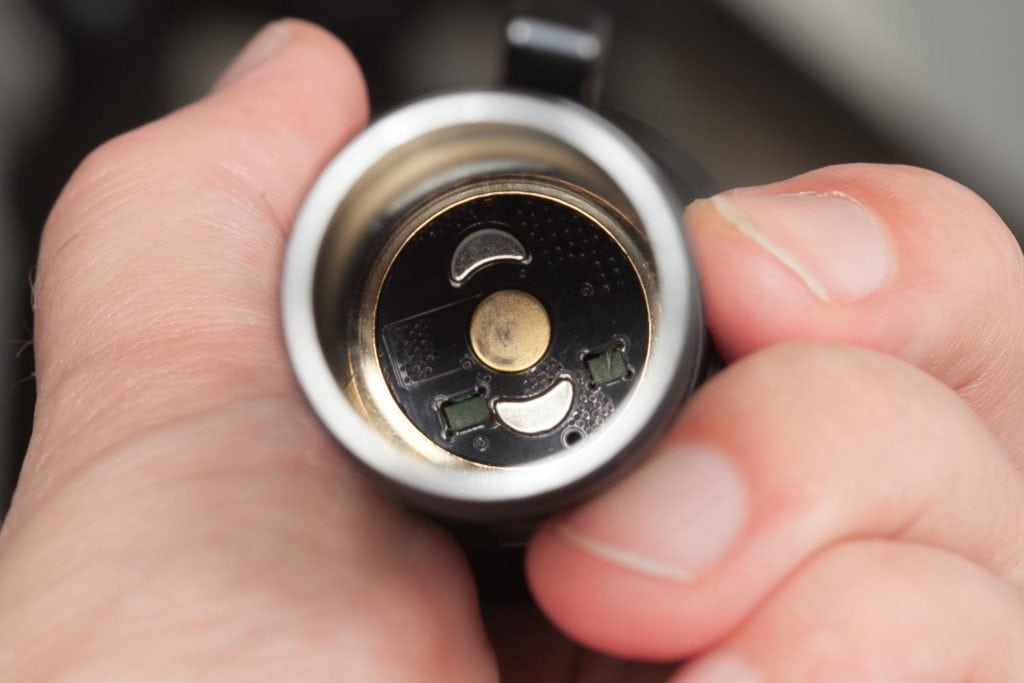 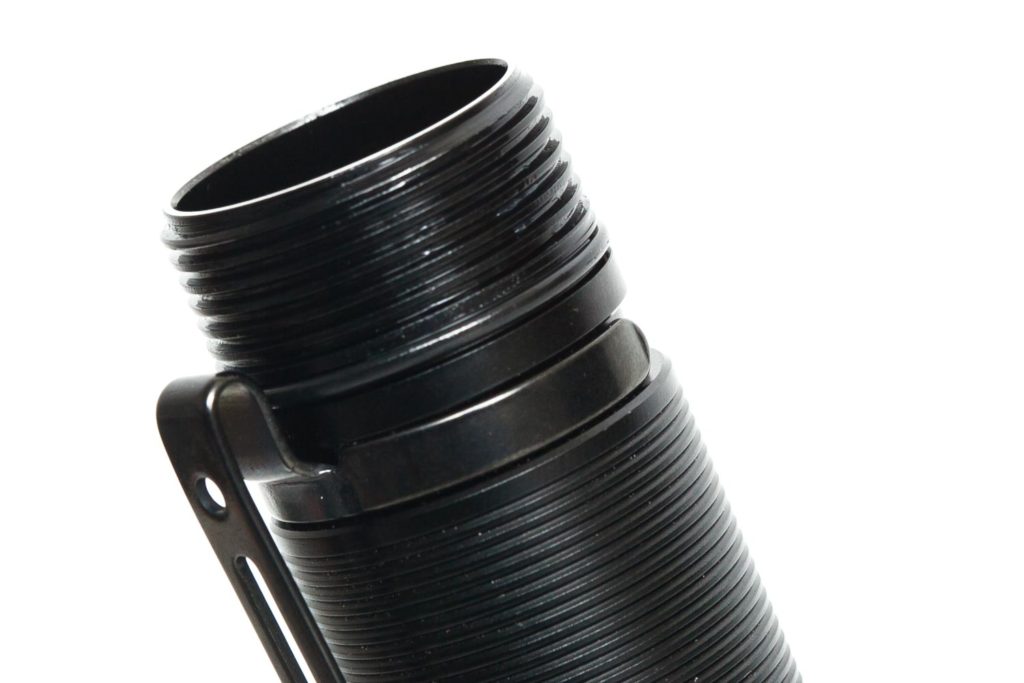 We’re reviewing LED flashlights, so yes, this part of the review is pretty important for sure. Unfortunately, there’s no specifications available at the time of reviewing, so I’ll just share what I see and measure.

It’s interesting to note that the C7 has no regular bezel like most other flashlights. The bezel is part of the head design. The head and bezel are one. The parts are glued together to keep any trespassers out. And if you really want to look inside, you better get your heat gun ready or your rubber strap wrenches.

From the front, you can see an ultra-clear glass lens and a smooth reflector. Deep inside the reflector is an LED installed and centered perfectly with a white centering ring. I’m pretty sure the LED is a Luminus SST70, and I used an Opple Light Master III to measure the temperature (CCT) and CRI, and these were the results: 5300K and 63 CRI.

I’m not really sure how trustworthy the CRI numbers are, but at least it’s below 70. 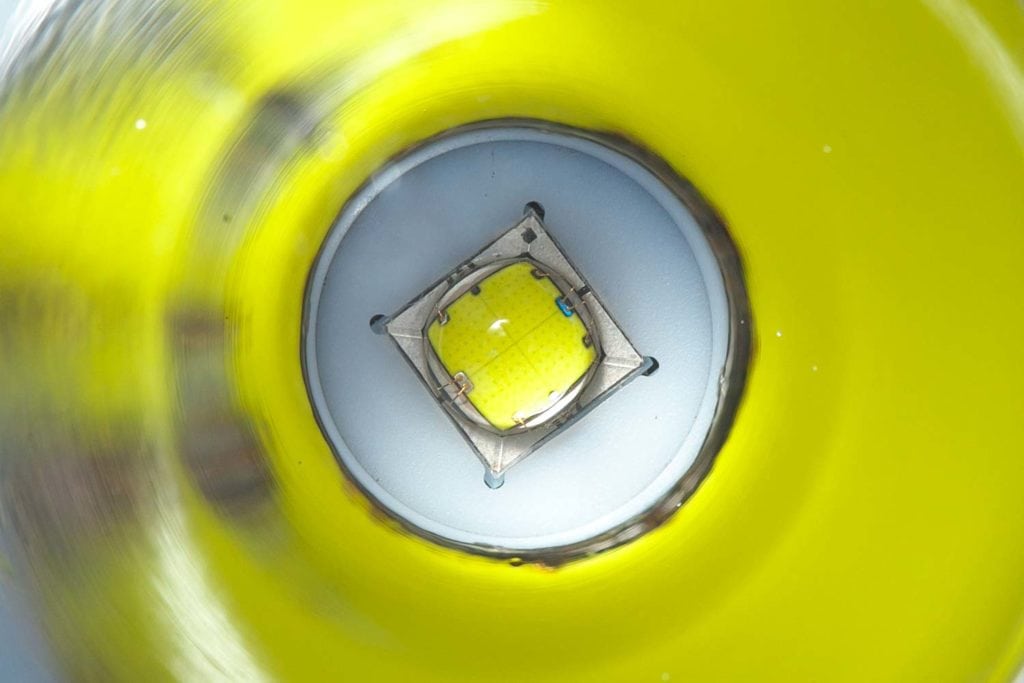 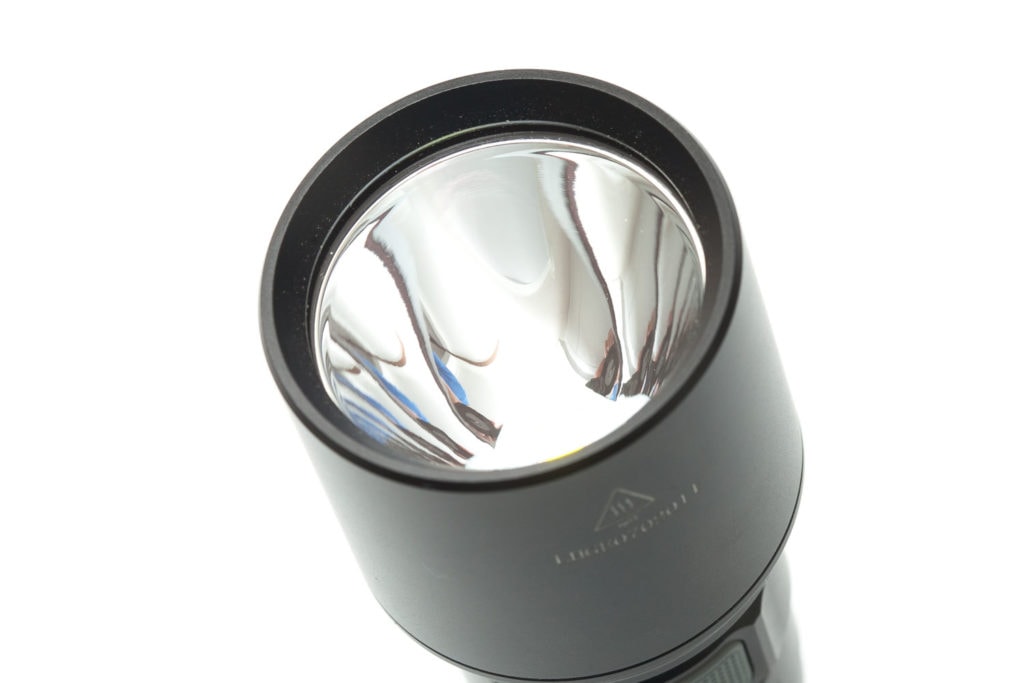 Size compared to other Fenix flashlights

And compared to some other, military-type tactical flashlights. 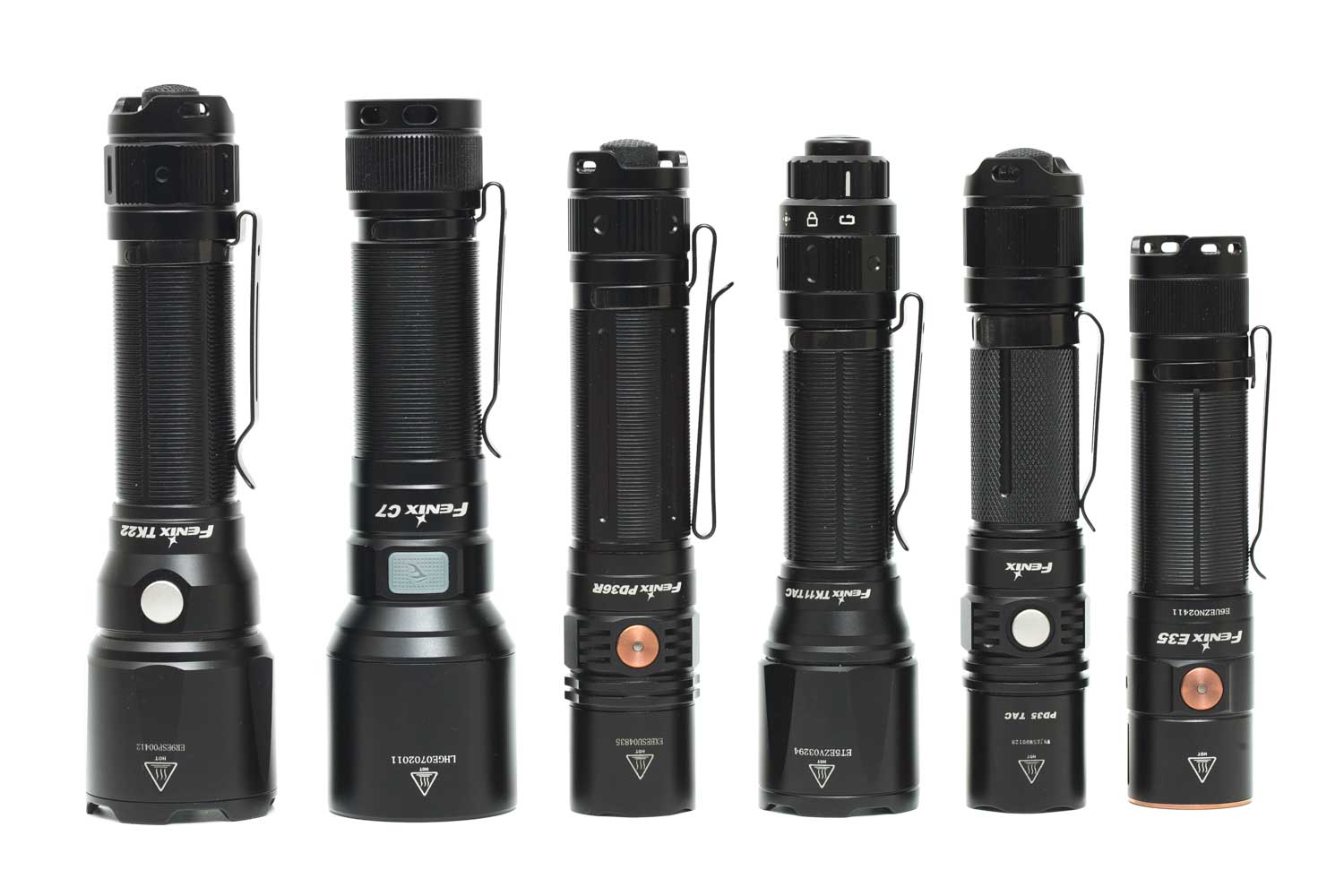 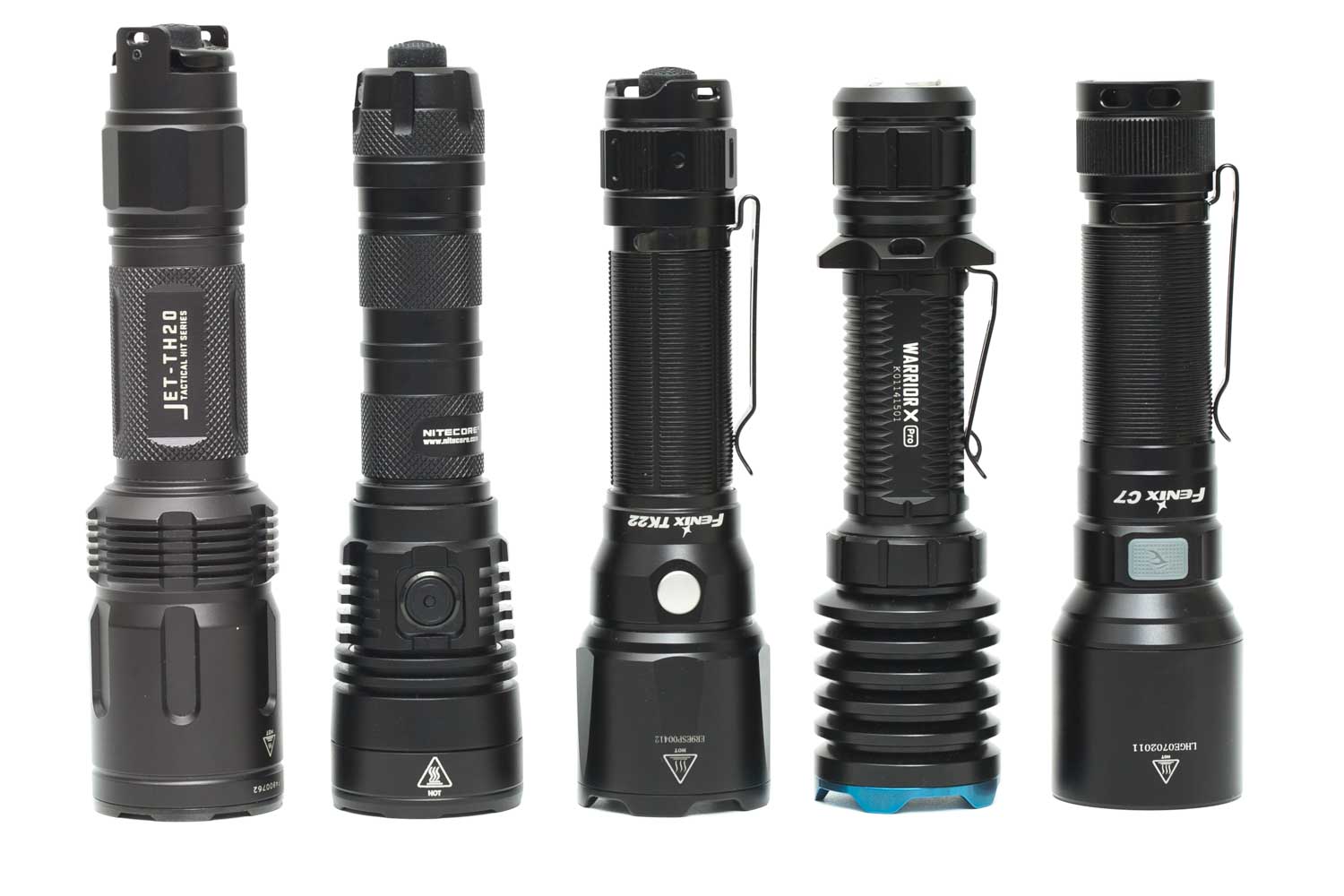 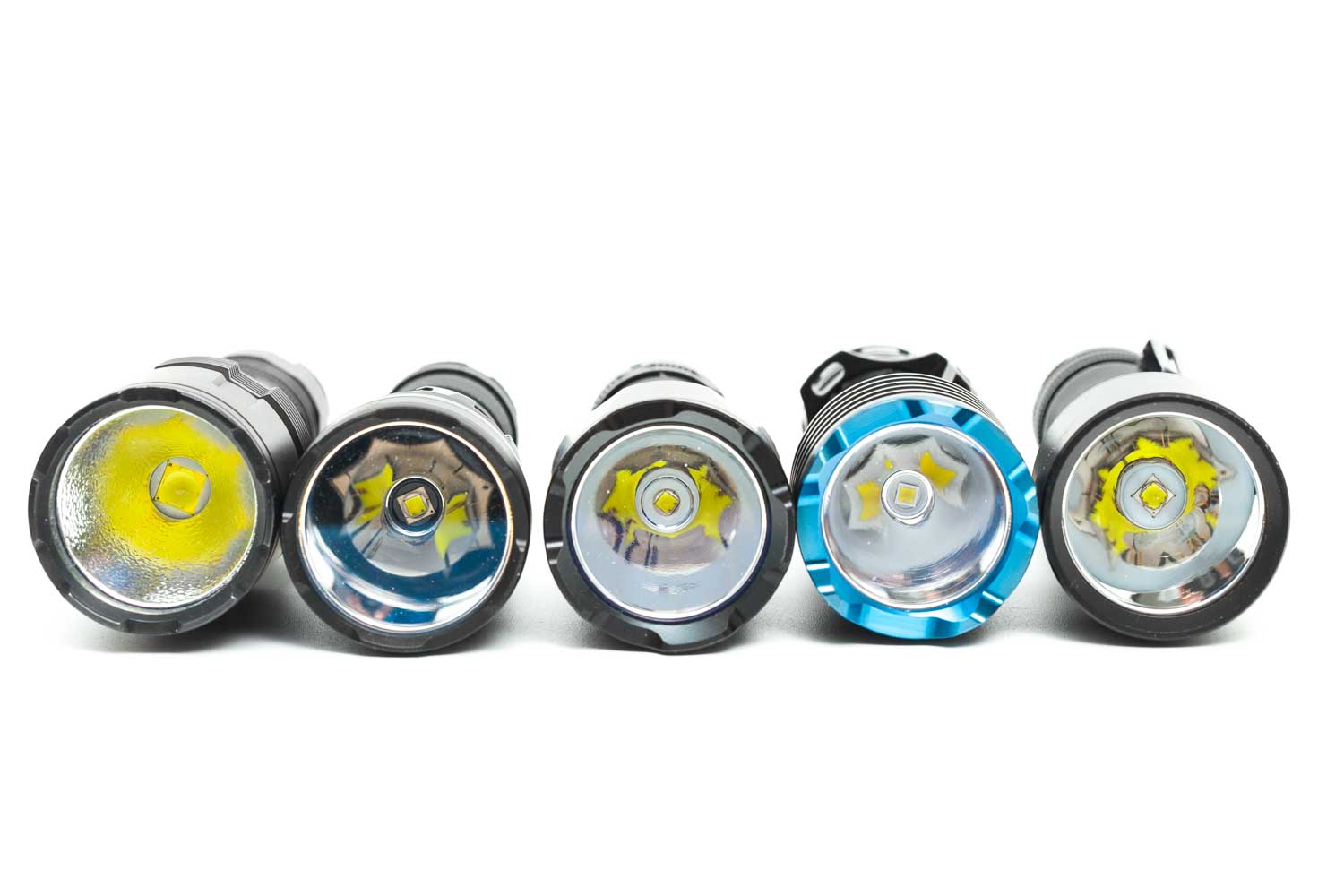 Okay, we arrived at how this thing actually works. Most (if not all) flashlights have drivers these days, and for many people, this can be the difference between hating and loving a flashlight. It could even come down to, what some people would think, some minor differences.

So, the C7 has a pretty simple and straightforward UI. Long press for on, and clicks for changing modes.

The C7 has a built-in charging system, so you don’t have to buy a 21700 charger or anything. You can use any USB-A to USB-C cable and charge the C7. I didn’t have a USB-C to USB-C charger at the moment, so can’t check that.

Below 3V the charge current is very low, at around 0.13mA, and once it’s above a certain Voltage, the speed goes up. It’s interesting to see the current starts at around 1.49A, but slowly increases slowly over time, and 30 minutes later it is charging at around 1.64A.

Unfortunately, flat tops won’t fit. There’s a physical reverse polarity protection so a flat top won’t make contact with the driver. That’s safe, but a pity if you have lots of flat tops lying around. 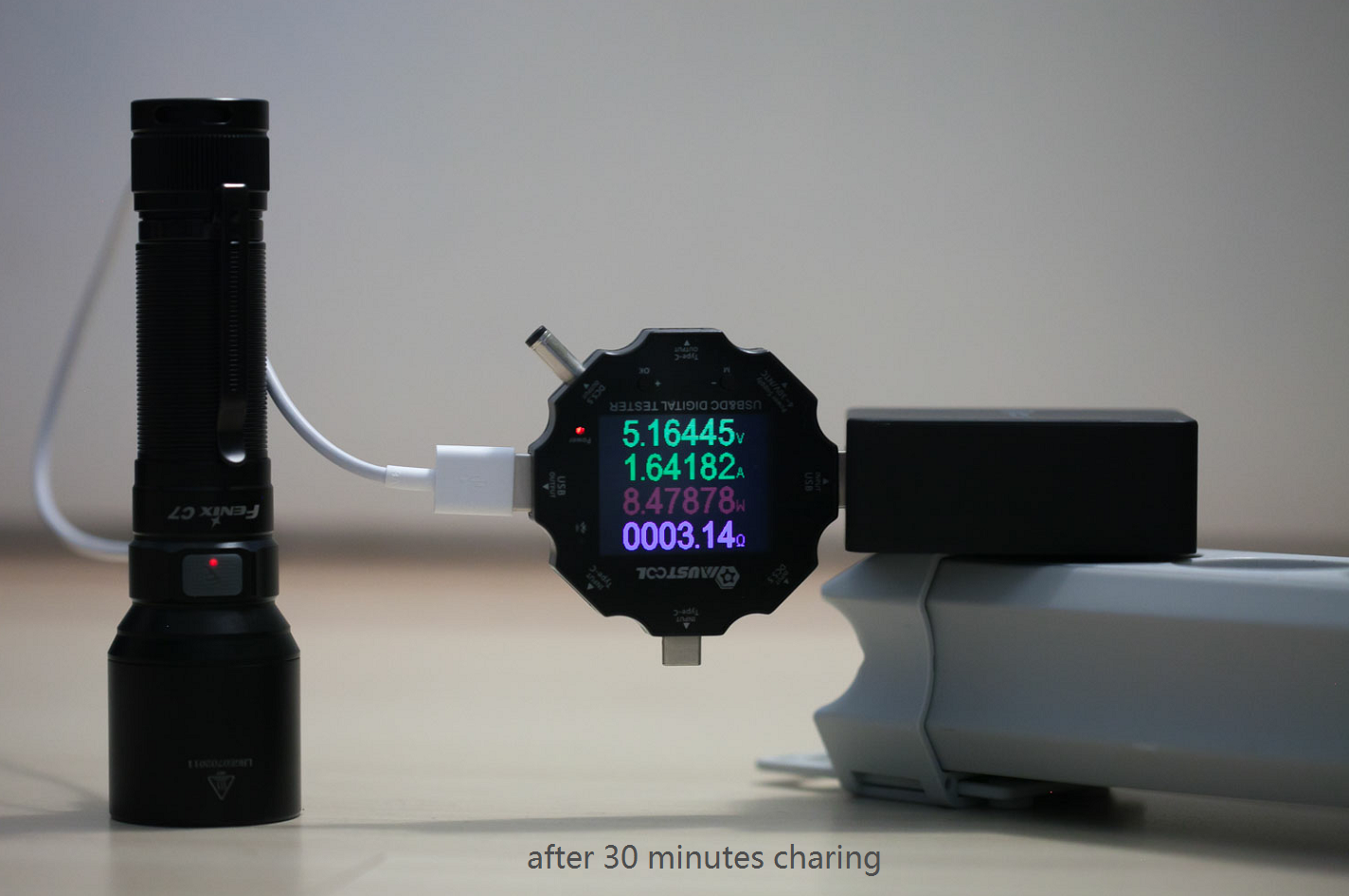 All output numbers are relative to my homemade Integrating Sphere. It is set up with an Extech SDL400 Lux Meter for measurements including a Kenko PRO1D ND-16 filter. The base measurement is done with a Convoy S2+ that has been tested at 255 lumens.

All of my readings were taken from a fully-charged Fenix ARB-L21-5000.


Edit: Fenix added the flashlight to their website, so I updated the table above.

The runtime test was done with the 50cm integrating sphere, including the Kenko Pro1D ND-16 filter and Extech SDL400 data logging Lux Meter. 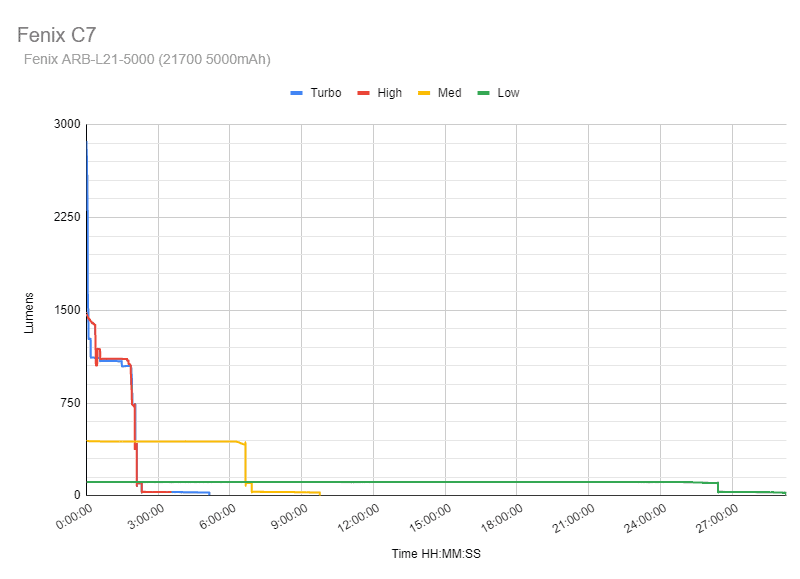 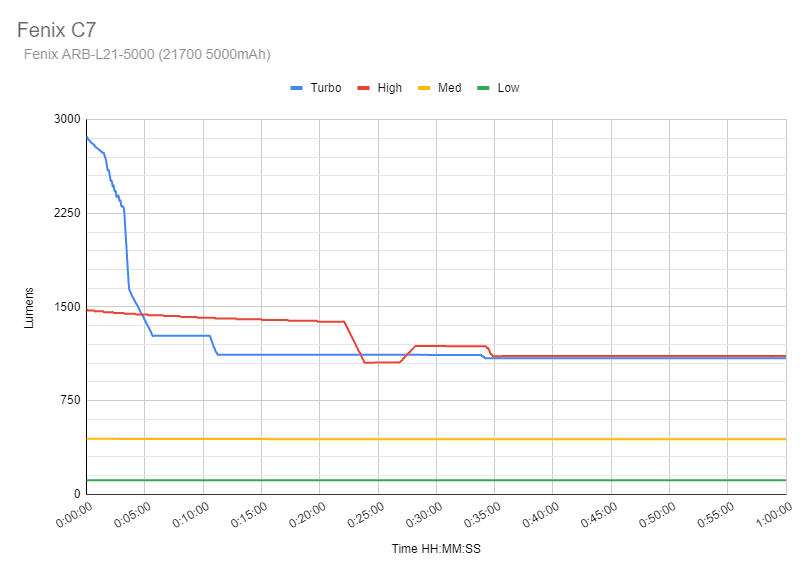 In the first graph you can see runtimes of all modes, except Moon.

Turbo mode starts around 2900 lumens and starts dropping slowly right of the bat. At exactly 6 minutes the output is about 1270 lumens. After 2 more little drops, (around 34 minutes) the output stays around 1090 lumens for a while. At 1 hour and 50 minutes, the output starts dropping rapidly, at which point you should replace the battery. At 2 hours and 7 minutes, the output drops from around 400 lumens down to 100 lumens at which point the total runtime is established. At that point the flashlight hasn’t fully turned off yet. It will maintain a low output (including a few more drops) till it really turns off at 5 hours and 8 minutes. (Specs: 1 hour)

The runtime for high mode looks similar to Turbo, except of course for the first few minutes. From 35 minutes it is pretty similar, and the runtime is 2 hours and 6 minutes. At this point it drops to below 100 lumens. The light keeper running for a few more hours on a very low output. (specs: 2 hours)

Note: Please keep in mind that the LVP (low voltage protection) is probably set at around 2.5 or 2.6V. After my runtimes, the Voltage was usually between 2.55V and 2.65V. This is not recommended, so you better replace the battery when the light starts dropping to about 10% of the initial output.

Medium has a stable output of 440 lumens for 6 hours and 16 minutes when it starts to taper off. At 6 hours and 39 minutes the output drops from 420 lumens down to roughly 110 lumens. At 6 hours 55 minutes it drops from 100 down to 30 lumens, at which point the runtime test has completed. But the light doesn’t shut off yet, until 9 hours and 45 minutes. (Specs: 7 hours)

I haven’t tested the runtime for Moon mode, which is supposed to run for 68 hours.

Measurements were taken indoors at 5 meters with a professional Hagner E4-X Lux Meter. Numbers were written down 30 seconds after start, and can be seen in the Measured candela column. Meters and yards are related to the candela measurement.

My measurements were higher from Eco to High, and a tiny bit lower in Turbo mode. This difference is negligible. 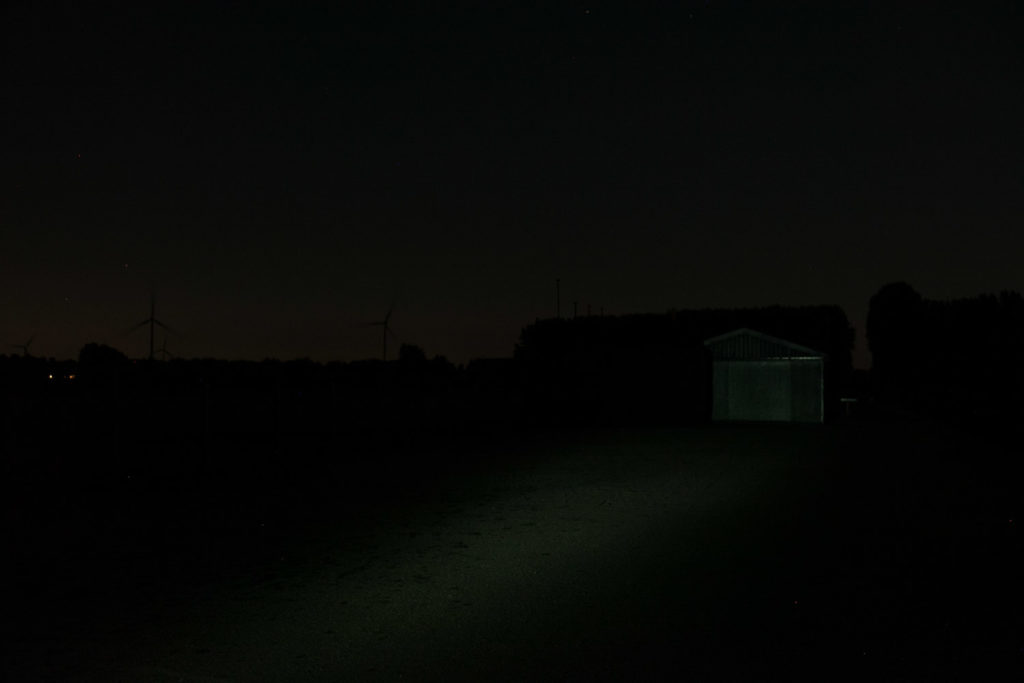 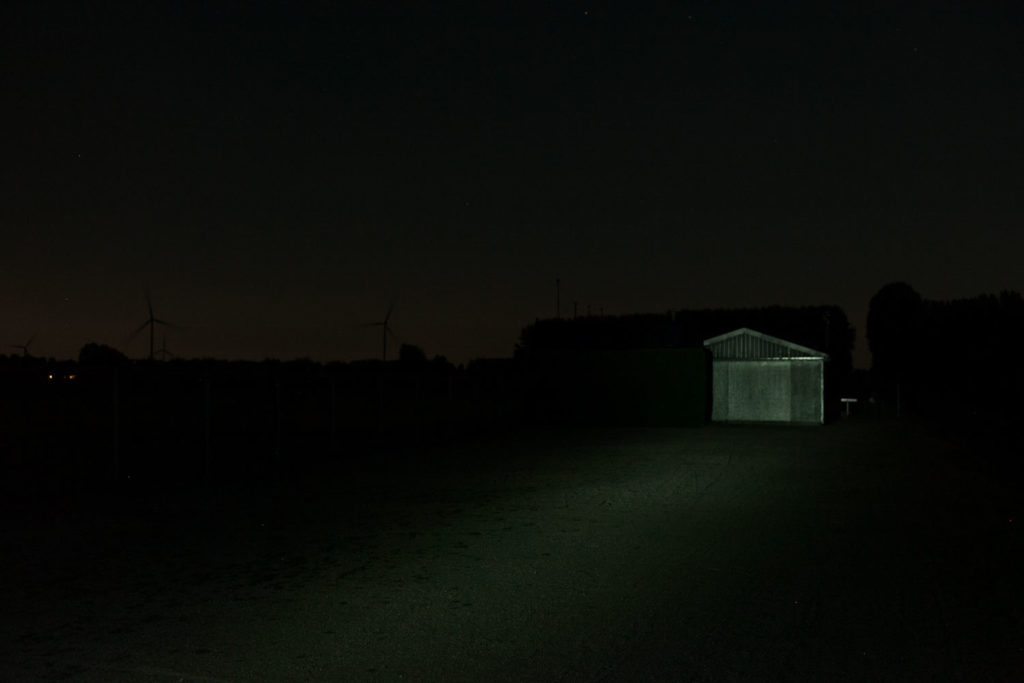 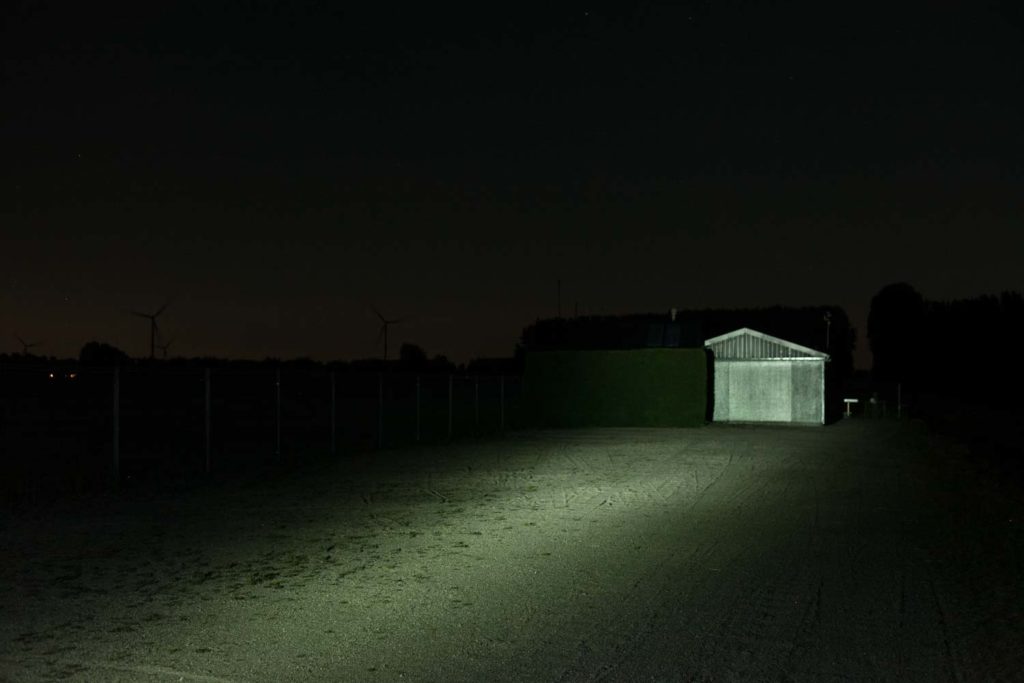 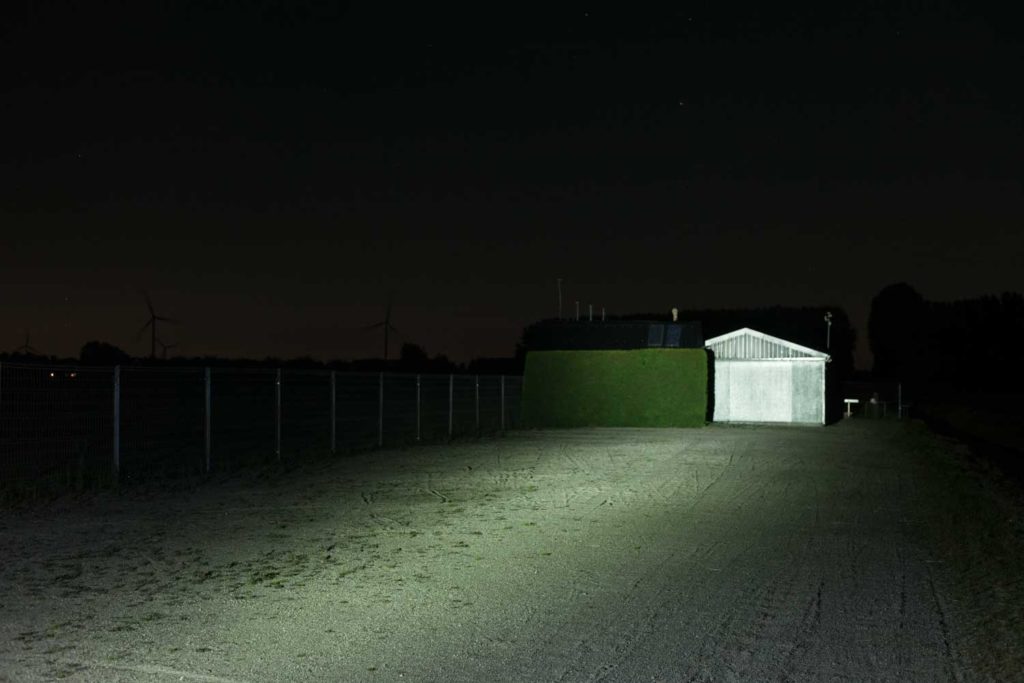 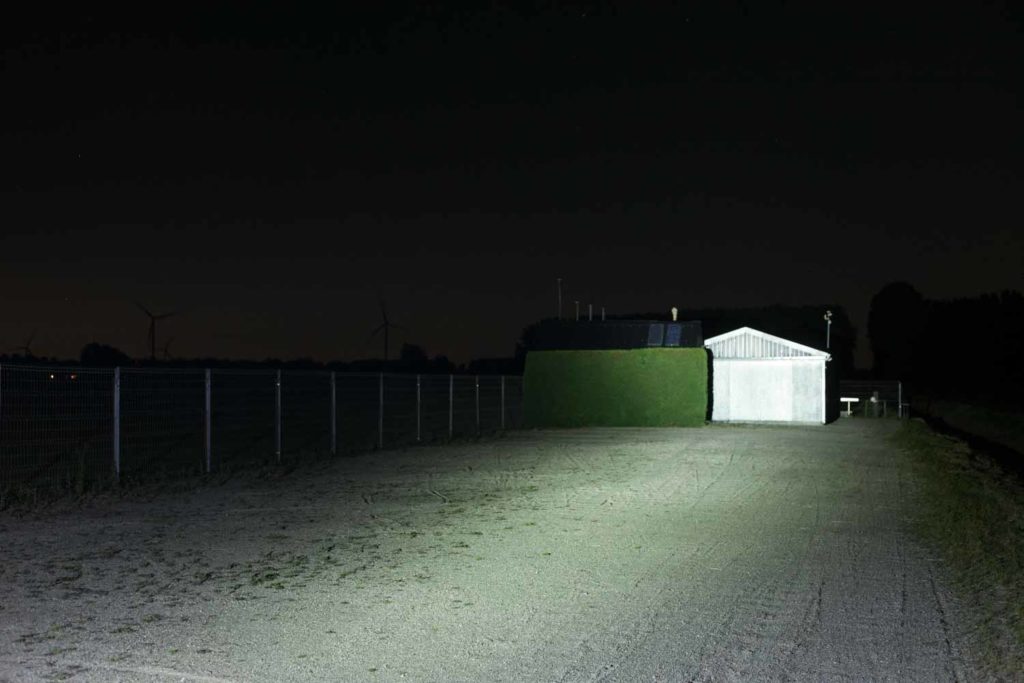 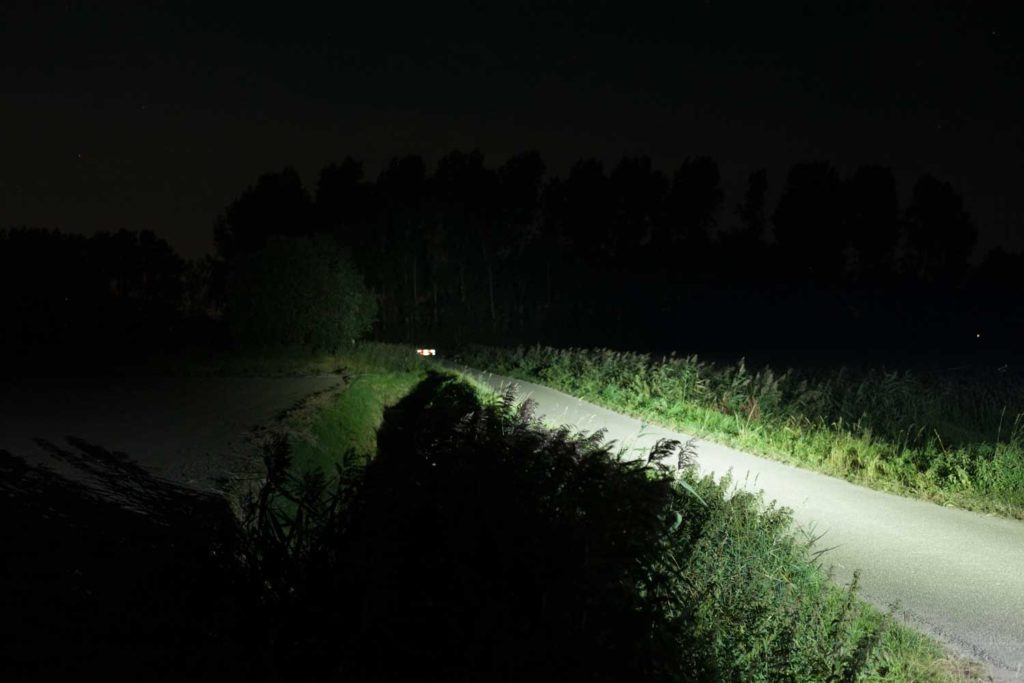 I didn’t know what to expect from the C7 because there was no information available on the internet at the time of starting this review. It’s the first flashlight in Fenix’s C-series, which had no history or whatsoever.

Just before finishing all the test, Fenix announced the flashlight publicly, so I added some of their specs to this review.

Personally, I’m not a fan of long-press for on/off, without shortcuts to Moon (eco) or Turbo.