Fenix is a very popular brand amongst flashlight users, worldwide. Especially when it comes to tactical flashlights, and EDC flashlights. One of the most popular tactical flashlights of the past was the Fenix PD35 (including all different versions), but don’t forget they also have a serious lineup of headlamps.

When you visit their website, they have about 15 different types of headlamps, including detachable L-shape headlamps. They don’t just work as a headlamp, but can be used as a regular flashlight. And the one I’m reviewing today is one of their smallest, if not the smallest, right-angle (L-shape) headlamp in their lineup. It’s extremely lightweight and small.

While writing this, I keep referring to it as a flashlight, but it’s probably better to call it a headlamp consistently. The HM50R arrived in a plastic box with the following: 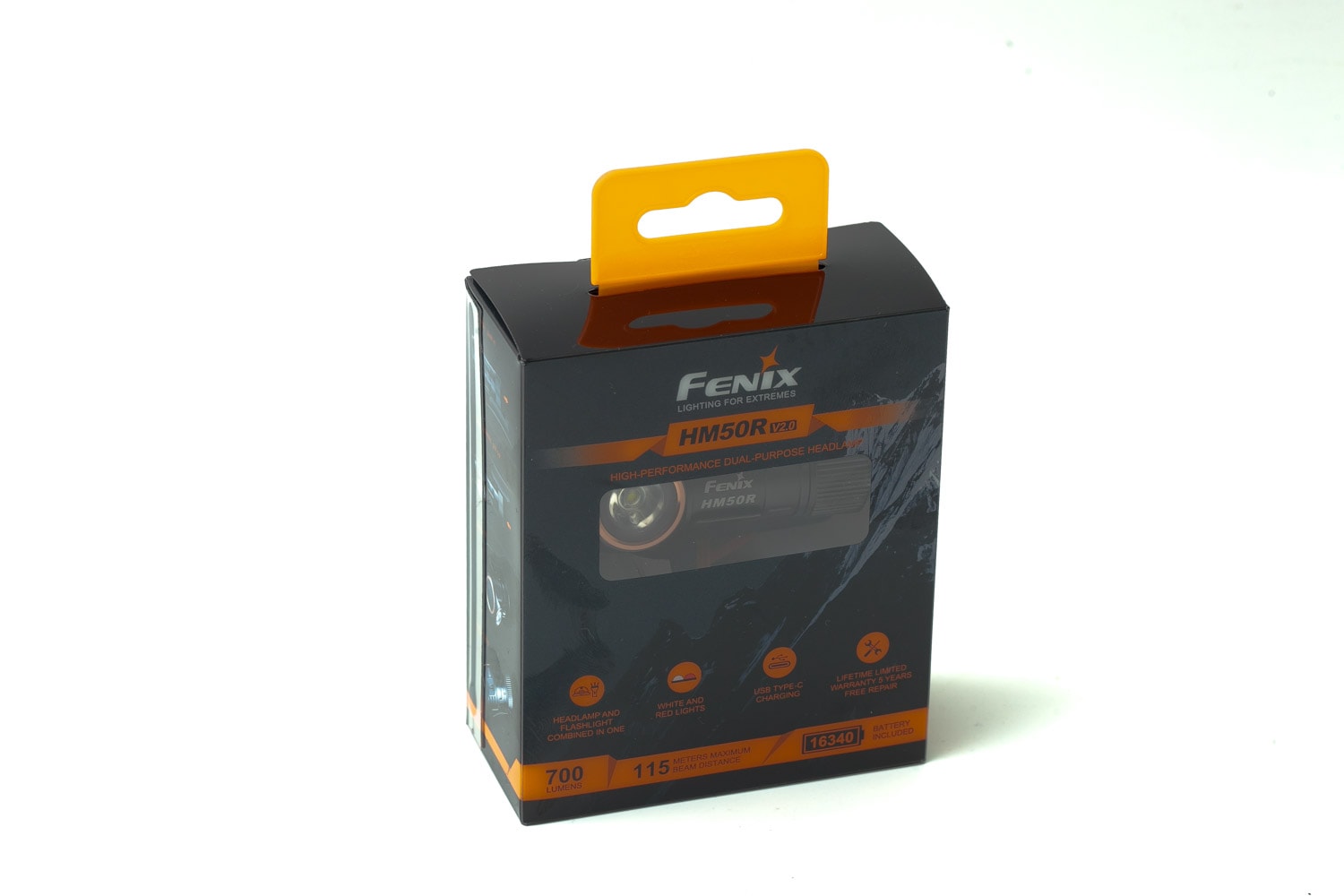 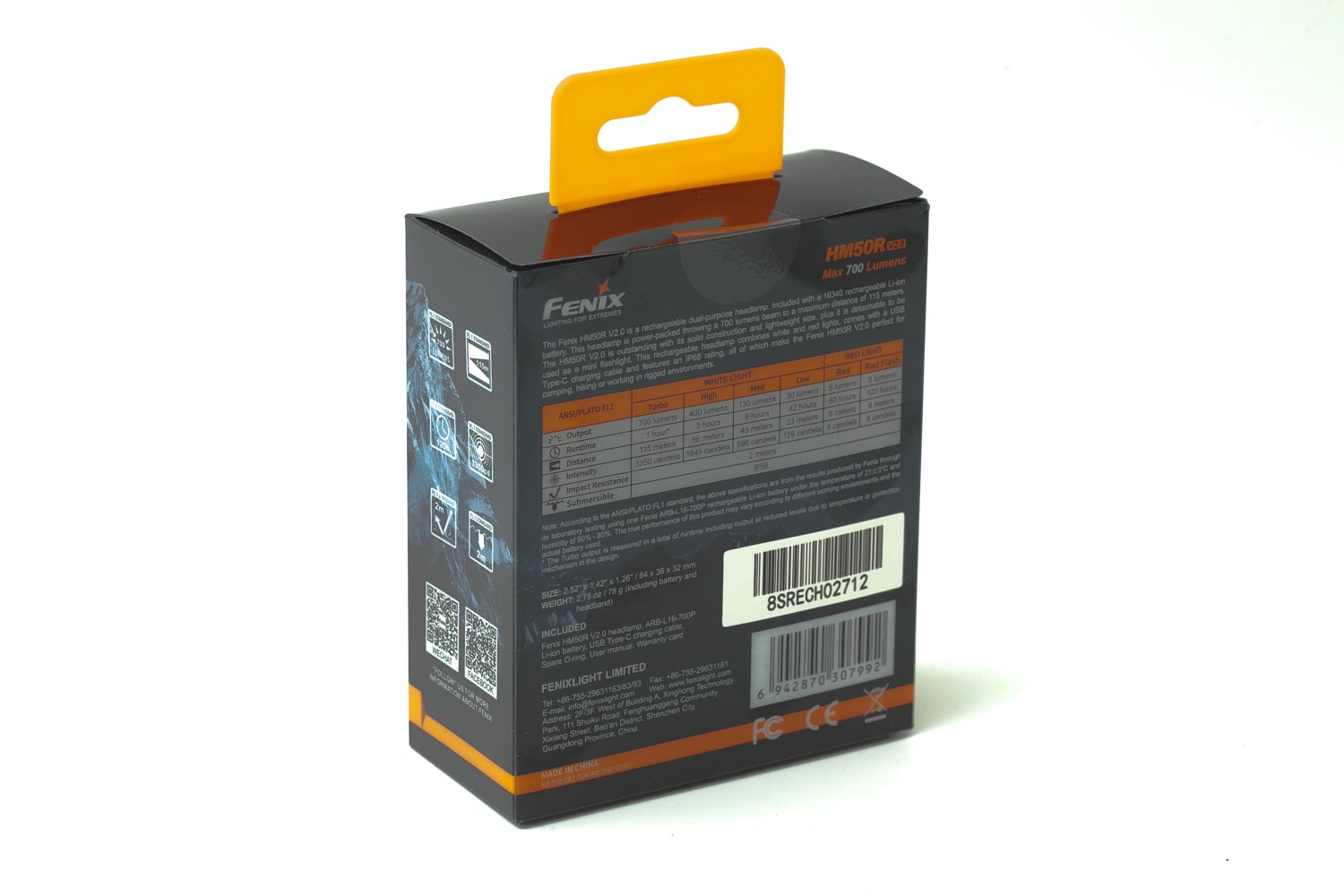 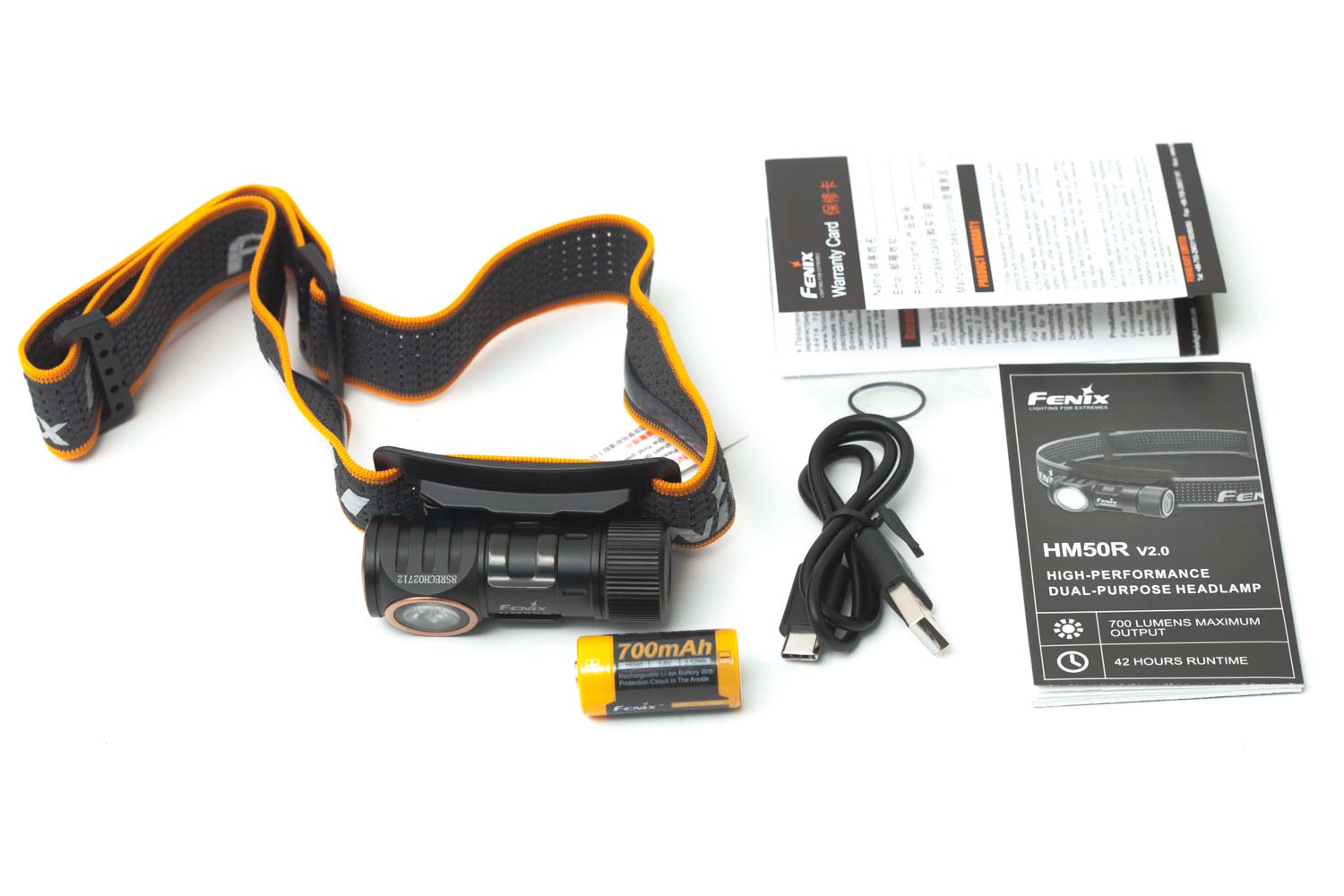 Of course, we’re talking about a headlamp, so the MH50R v2 came attached to the headband with a metal clip. The clip itself is pretty stiff, and I bet most children won’t be able to put the light back into the clip without the help of an adult. Yep, it’s that stiff.

Great I would say because that means it’s pretty stable and light enough to take it along while jogging. And when you bump it, it won’t easily change position, so that should be a positive thing and not a negative.

When you are used to flashlights that use a single click for On and Off, you better take notice. This headlamp can only be activated with a long press. A single click would only show battery status with the indicator led inside the switch.

If you really like to take it out of the clip, you can do so, but keep in mind it might get some scuffs along the way. Putting it back will be more difficult than taking it out.
Edit: I should have read the manual better because the clip is actually attached to the plastic plate. You can easily detach it by pressing a tab and slide it out of its position. Now you have a right-angle flashlight you can attach to your clothes, pocket, shirt, or whatever.

One more thing I noticed is the soft rubber band, on the inside of the headband. I’m pretty sure that is meant to keep the headband in place on your forehead, or on a helmet. The rubber makes it ‘stick’ better to let it stay in place. 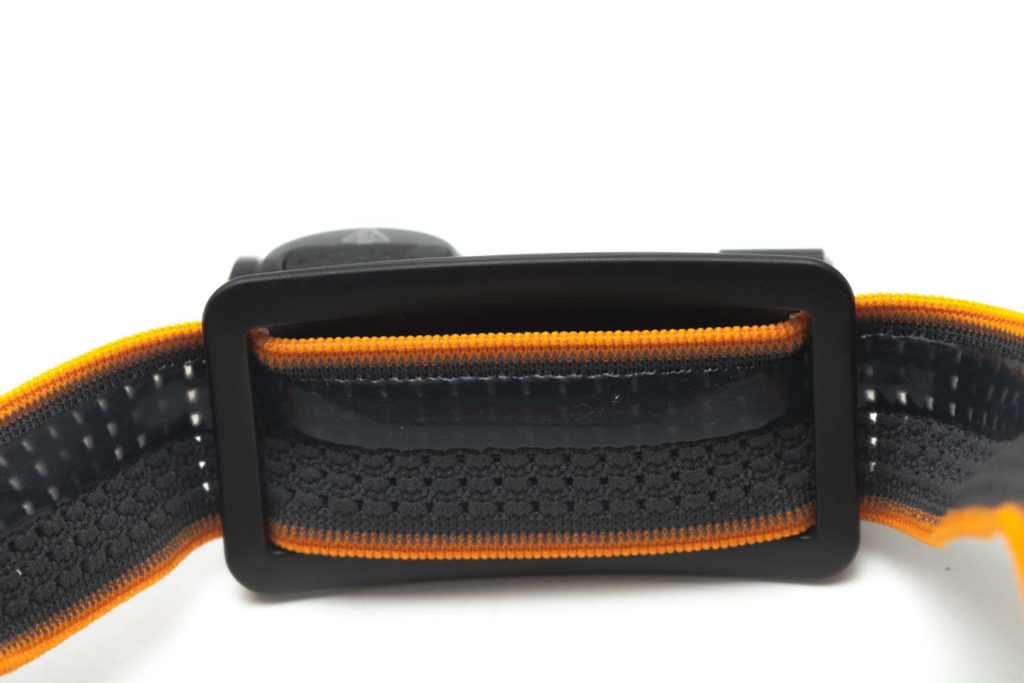 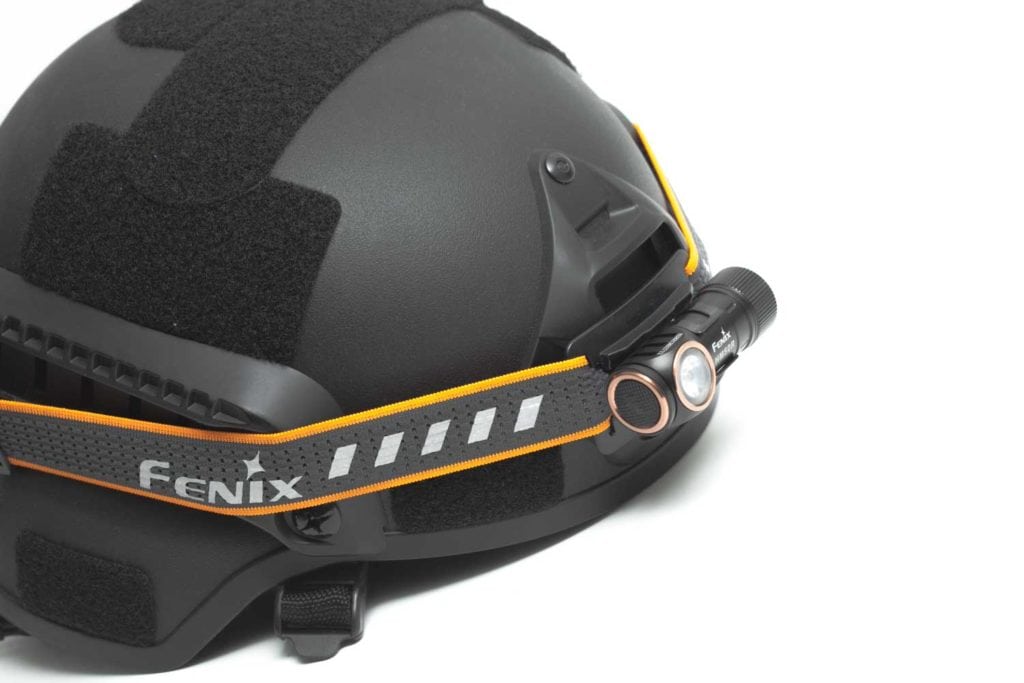 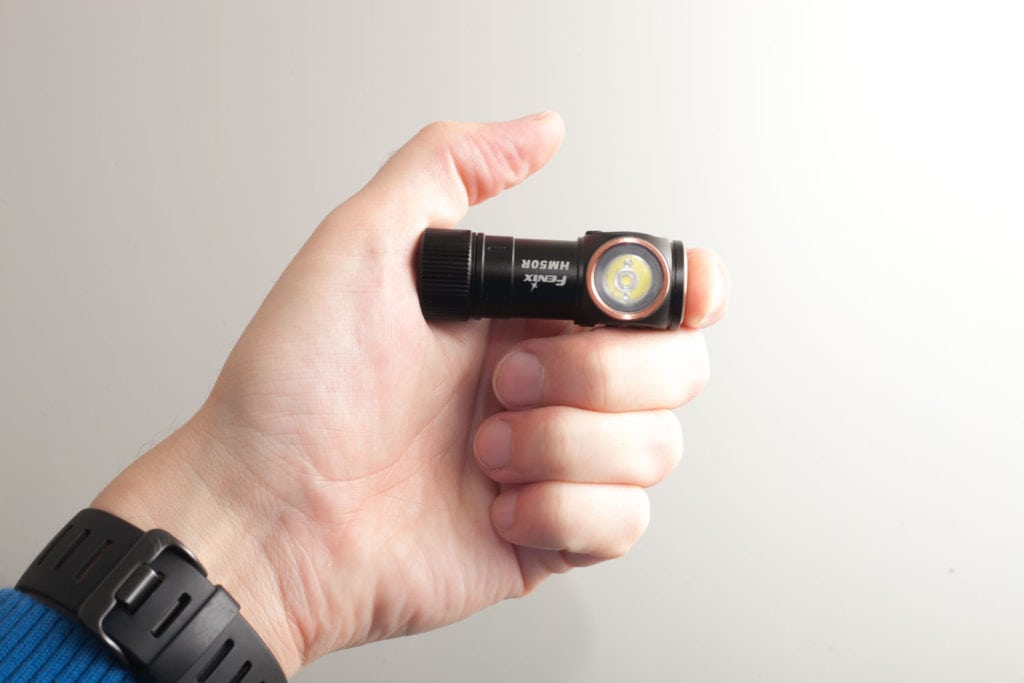 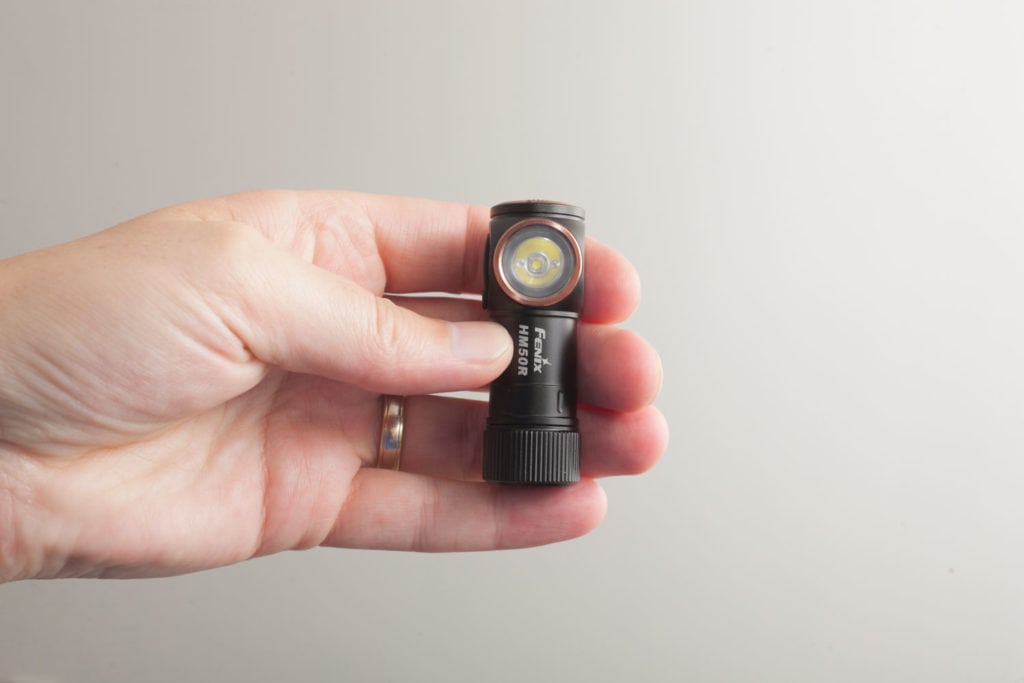 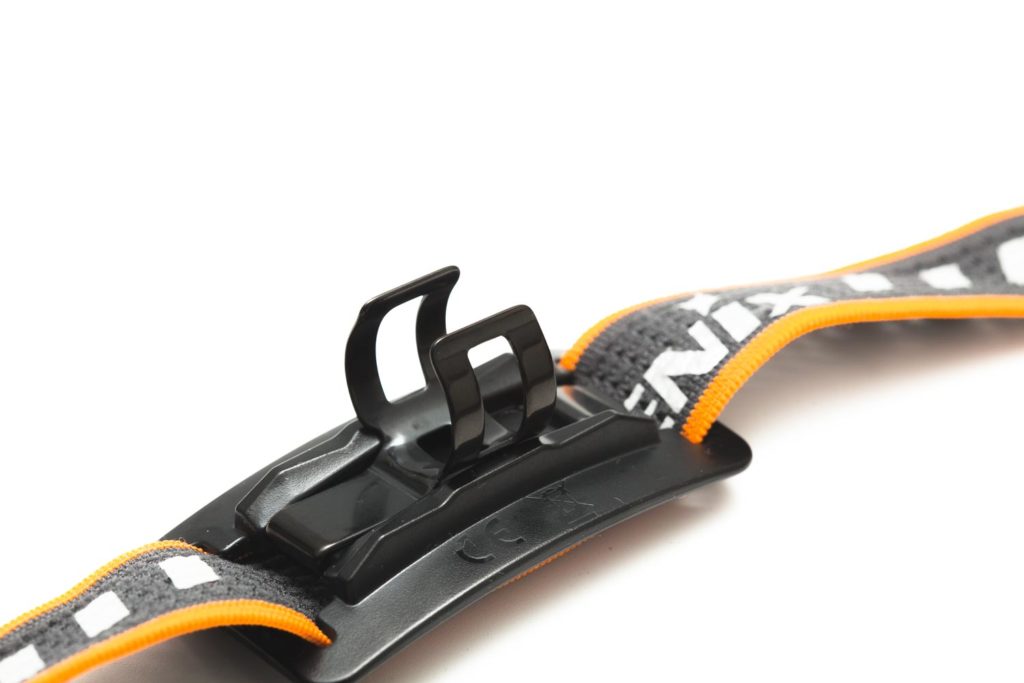 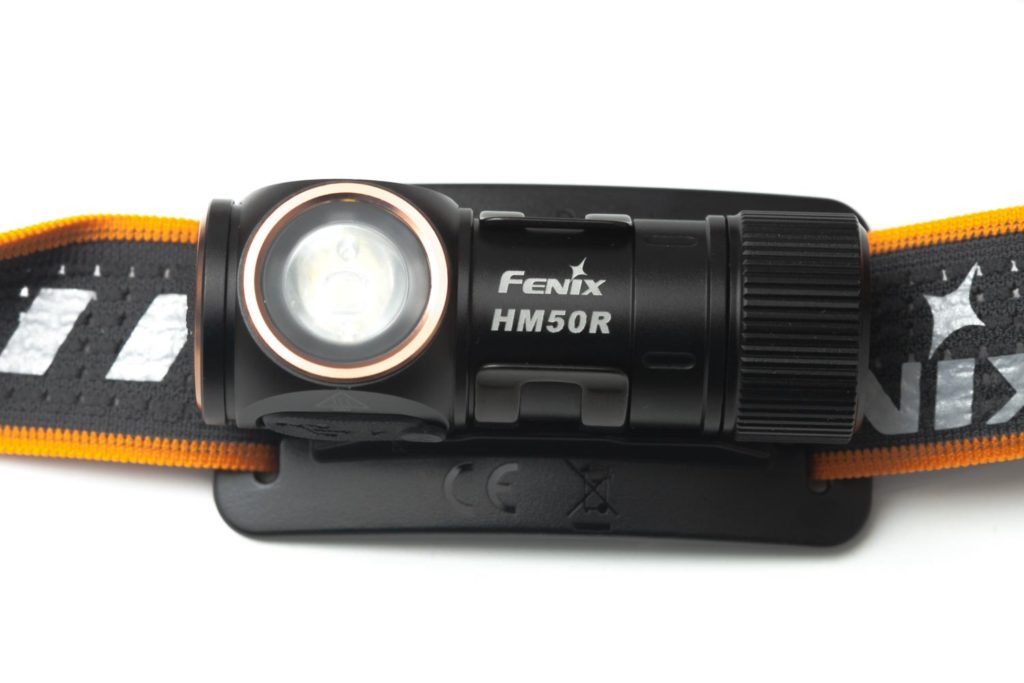 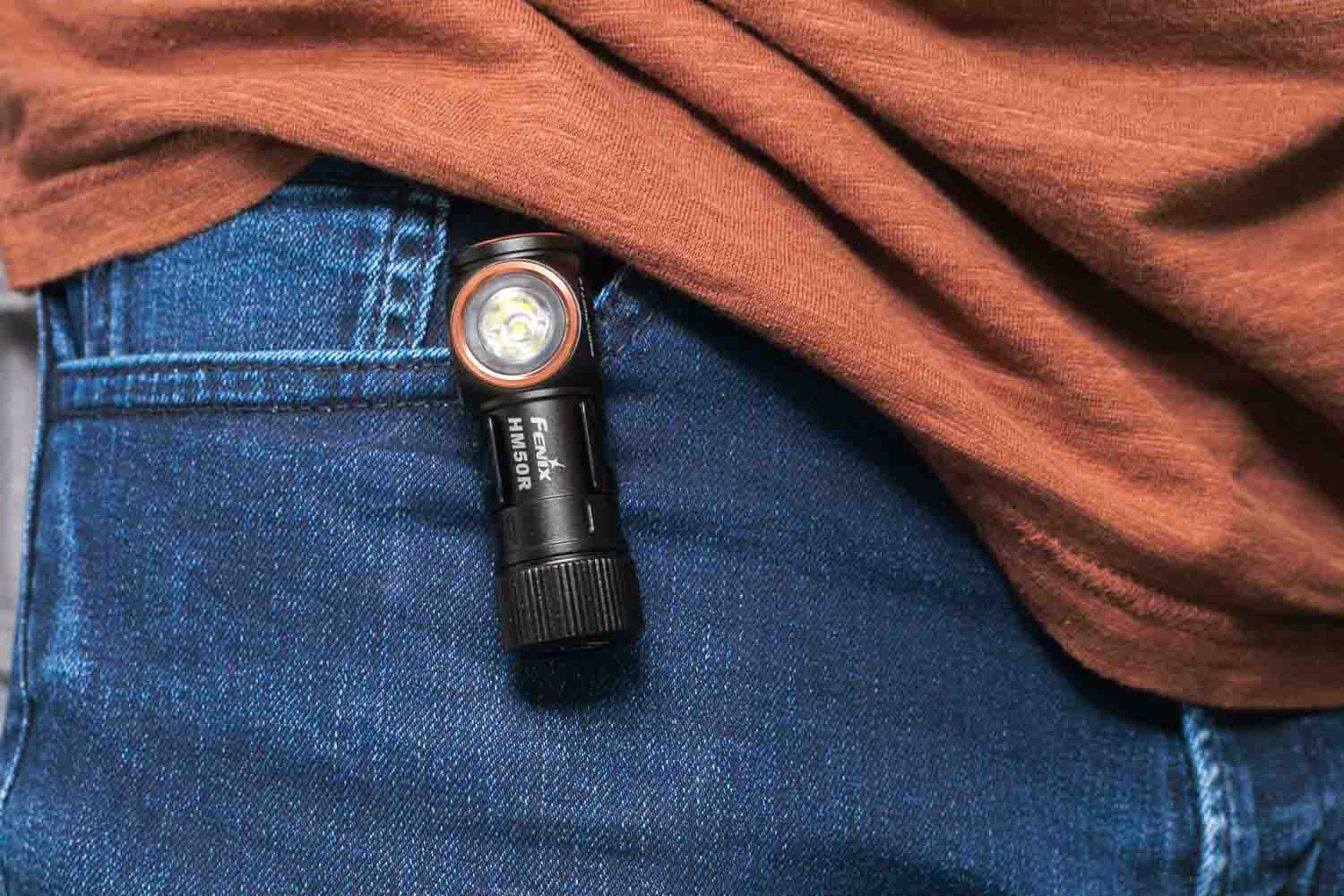 From all the Fenix flashlights I own, none is built crappy. They are all built pretty well, and the only thing I don’t particularly like is the anodization. Not that this is anything bad, but the coating looks a little bit shiny. I’m more a sucker for a matte finish.

Threads are lubed, and nothing feels strange or wobbly. The pocket clip/ headband clip looks a little thin though, but I’m sure it will be good enough for most instances, but it could break if you put quite a bit of pressure on it.

This is what Fenix says about the LED: Cree XP-G3 S4 white light LED. There’s no mention of the color temperature though.

The HM50R v2 doesn’t use a reflector, but a TIR optic. It’s not 100% transparent/clear, but it has a kind of ‘coating’ that reminds me of the infamous DC Fix film (sand). A self-adhesive film that people use to make an ugly beam look more smooth.

By the way, DC-fix is actually a great way to make your ugly-looking beam look better within a minute. Just stick some of the film on top of the lens, and you have a much smoother beam.

I’m not saying this headlamp is using a film, but it’s definitely not 100% clear/transparent.

There’s some sort of bezel with the same golden finish as the ring around the switch.

On 2 sides of the LED are red AUX lights installed. The UI includes a solid red, and blinking red, that can be accessed by a double click. 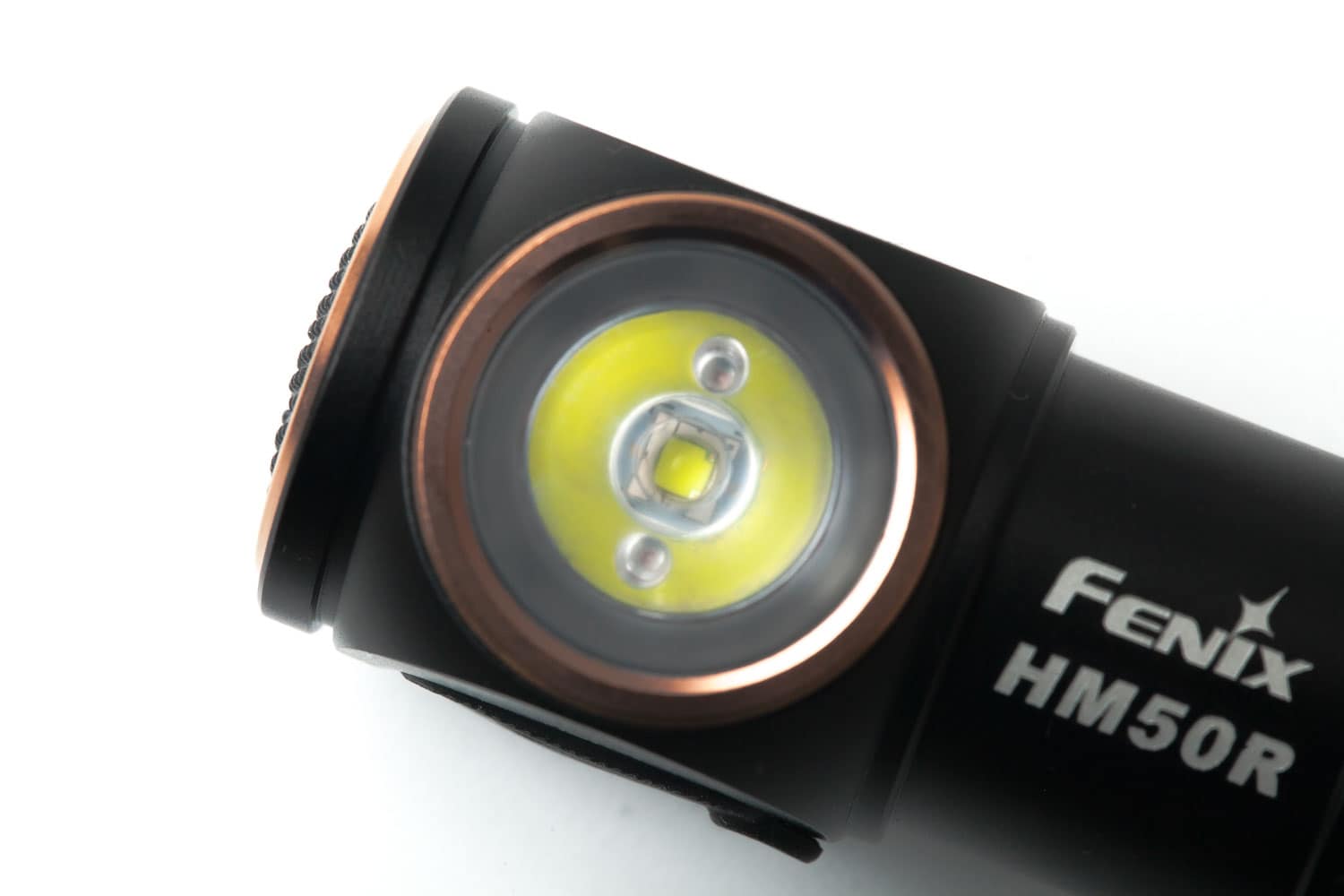 Next up is the user interface. One of the first things you’ll notice is that it won’t turn on with a click. To turn it on you need to press-and-hold the switch.

Fenix notes this only works with the included Fenix ARB L16 700P battery.

I’m glad Fenix included a nice little 16340 battery with the light, that is supposed to have a total capacity of 700mAh. That’s been the capacity of a regular 18350 battery up till just a few years ago.

The 16340 is a rechargeable lithium-ion battery that can be charging inside the light as well as in your dedicated lithium-ion charger. Please keep in mind that these smaller batteries are more prone to damage by overcharging, so make sure you know at what charge current (mA) it is getting charged. This is only necessary with a stand-alone charger, and not the built-in charger. The built-in charger takes care of all this.

During charging, there’s a little red light behind the switch, which turns green when it is finished. 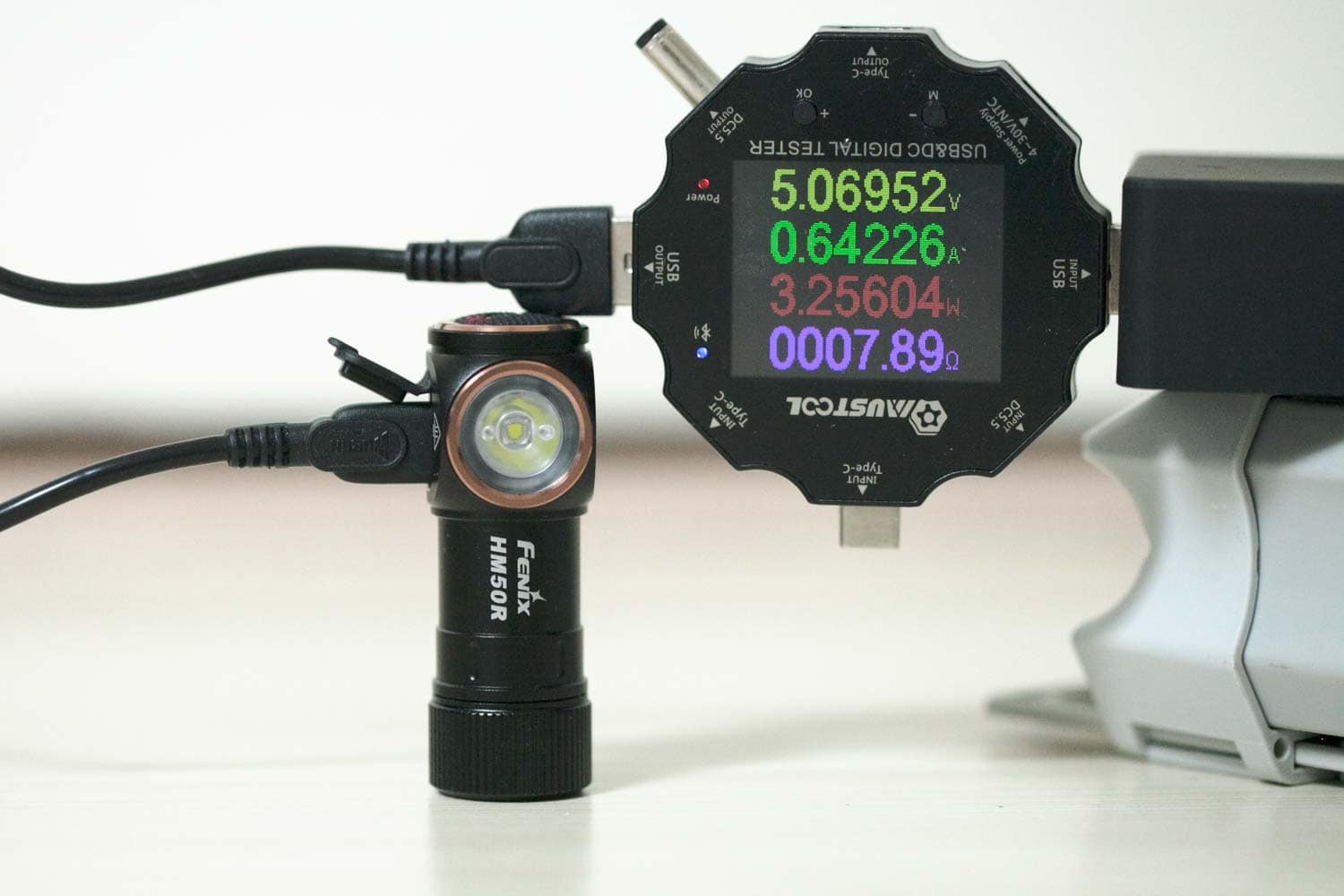 All output numbers are relative to my homemade Integrating Sphere. It is set up with an Extech SDL400 Lux Meter for measurements including a Kenko PRO1D ND-16 filter. The base measurement is done with a Convoy S2+ that has been tested at 255 lumens.

Amps were measured with a Fluke 77III, at the tailcap. Measurements were done manually at start and after 30 seconds. The 10-minute measurement was taken from the runtime graph.

I only measured Amps for the red light. My measurements were pretty close to specs.

The runtime test was done with the 50cm integrating sphere, including the Kenko Pro1D ND-16 filter and Extech SDL400 data logging Lux Meter. 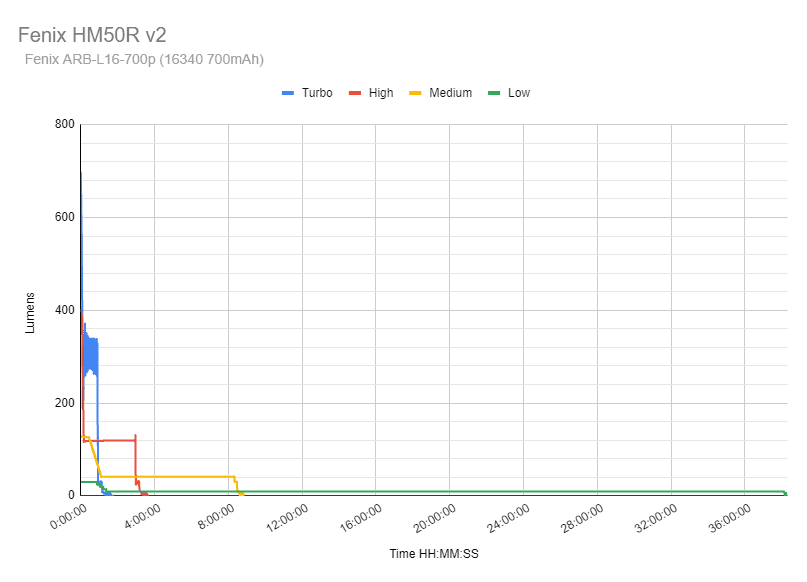 First 1 hour of the test

You can see Turbo has the typical Fenix zigzag pattern. This is not some kind of weird problem, because many Fenix flashlights have that. I know, it’s not something desirable, but in person, it’s not really noticeable, because it takes about 3 minutes to get from the bottom of one of those zigzags to the top.

According to the ANSI FL1 standards, the runtime ends at 10% output of the initial measurement.

Turbo: starts at a little over 700 meters and drops to just below 200 in 7 minutes and 30 seconds. It then climbs back up again to 365 lumens at the 14 minute-mark. It then zigzags till the 55-minute point when it drops down to about 120 lumens. The next drop is at 56 minutes and 30 seconds down to 30 lumens. This is where it is called the end of the runtime. But it continues to decrease output till it finally turns off at 1 hour and 36 minutes. (specs:1 hour)

High: starts at around 400 lumens, and starts to decrease rapidly from 5 minutes. Just before the 10-minute mark, the output is down to 117 lumens. At 2 hours and 58 minutes, the next major drop is down to 30 lumens. This is the end of the official runtime. But it continues to run, and turns of at 3 hours and 36 minutes. (specs: 3 hours)

Medium: starts at roughly 127 lumens, and does that for about 27 minutes. It then starts dropping gradually till it reaches 41 lumens around 1 hours and 9 minutes. From then onward the output is stable till 8 hours and 20 minutes, from when it starts dropping. At 8 hours and 51 minutes the light turns off. (specs: 8 hours)

Low mode: starts at 30 lumens. From 53 minutes it starts dropping down to 9-10lumens. The light continues to run at this output till 38 hours and 7 minutes. Within a couple of minutes, the light turns off. (Specs:42 hours)

Measurements were taken indoors at 5 meters, after 30 seconds, with a professional Hagner E4-X Lux Meter. 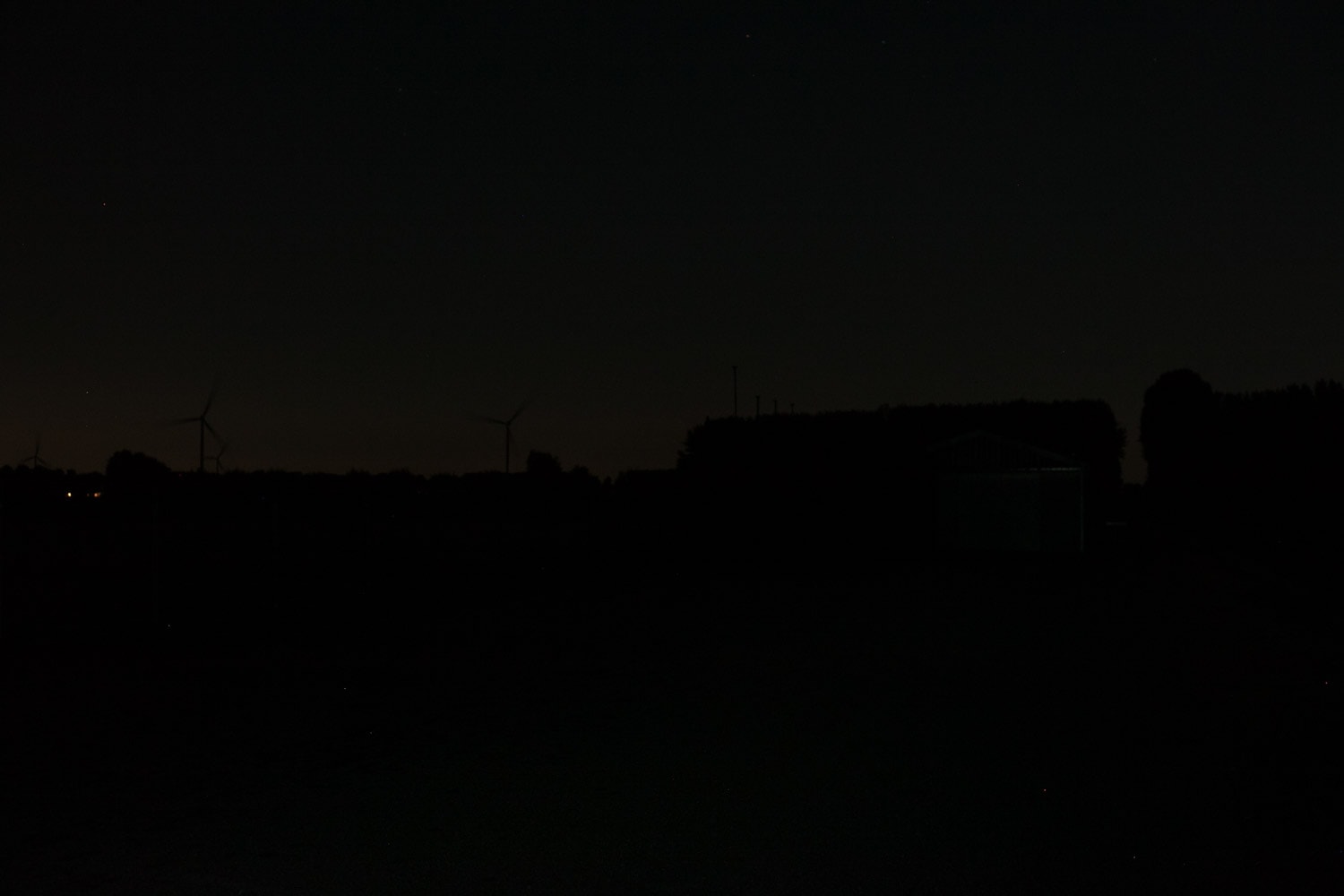 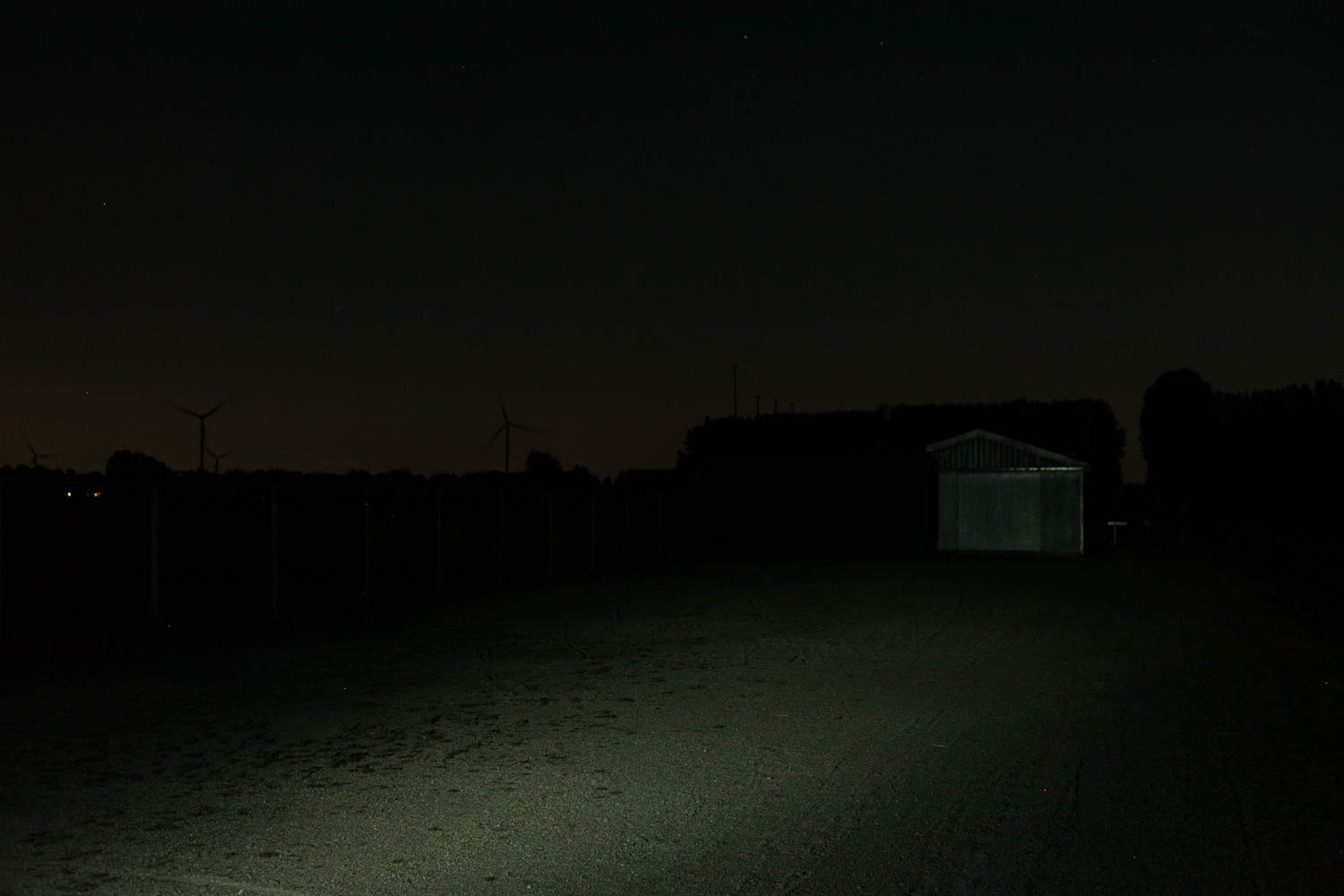 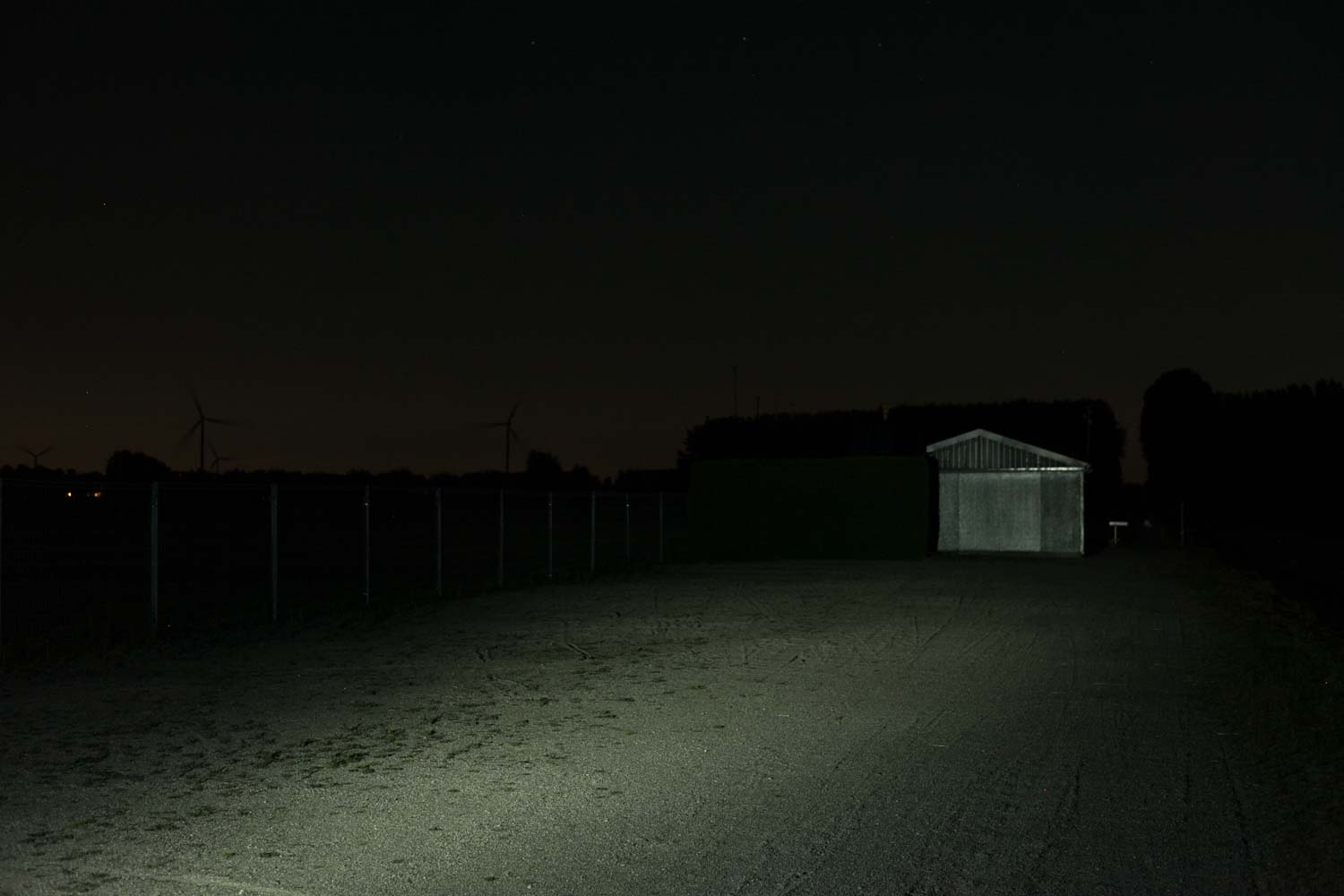 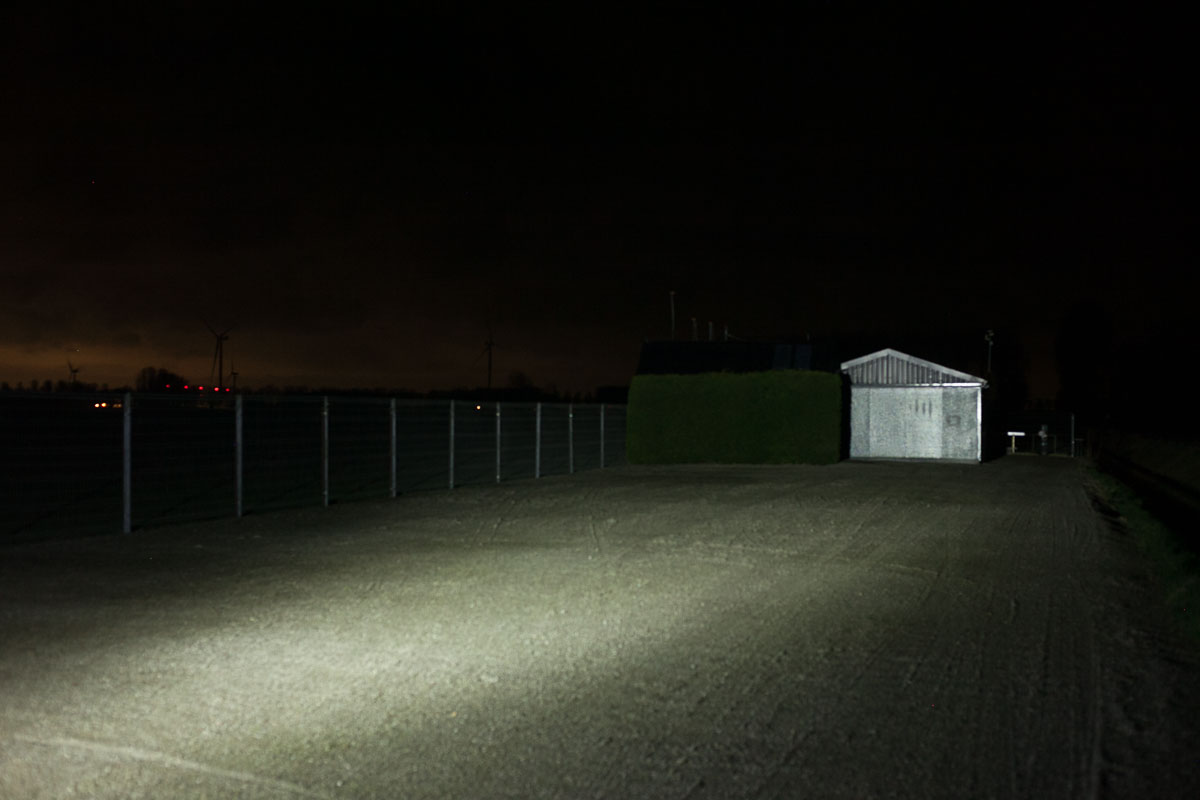 
Even with a small battery like this, the light will run longer than I am able to run… lol. Besides being lightweight, it also fits comfortably on your head, with an extra rubber band to keep the band from moving around on your forehead.

If you don’t need a high power headlamp, and are okay with having an output between 100 and 300 lumens, but with a lightweight headlamp, check this out.