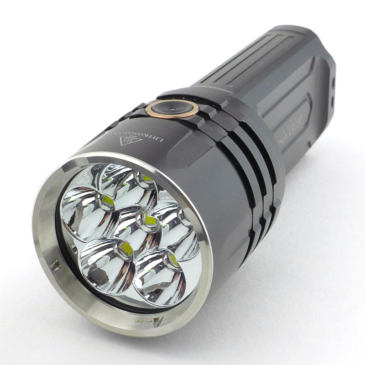 Can it be true? 10,000 lumens from a light you could fit in your pocket? In this review of the Fenix LR35R I put Fenix’s claimed output figures to the test. As well as this companion review there is a full length video review, with behind the scenes insights into the testing. It turns out that this light went beyond the limits of my test equipment and meant making modifications to allow an accurate reading to be taken. 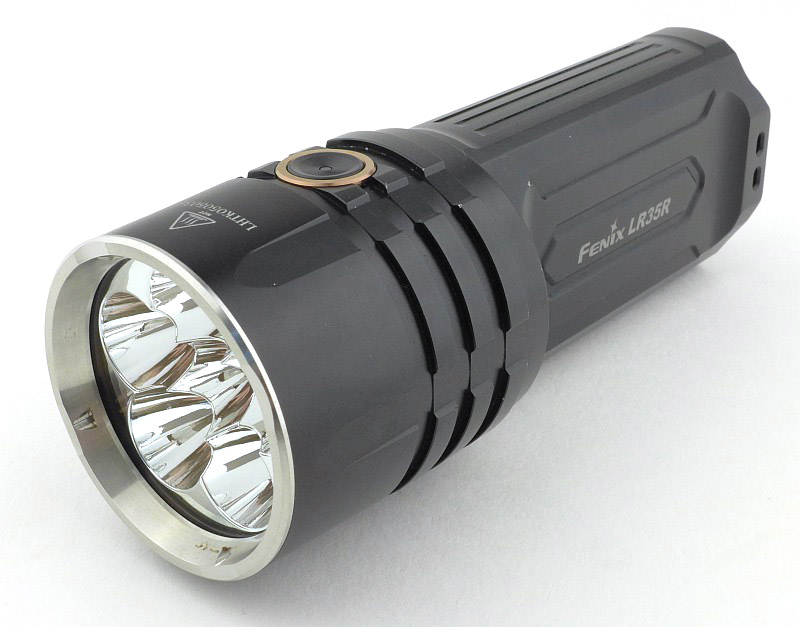 What is in the box?:
As this is a pre-production sample, there is no un-boxing as only the light was supplied.

A good look round the LR35R – Things to look out for here are:
Be sure to check the video for many of these details.

Please be careful not to judge tint based on images you see on a computer screen. Unless properly calibrated, the screen itself will change the perceived tint.

The indoor beamshot is intended to give an idea of the beam shape/quality rather than tint. All beamshots are taken using daylight white balance. The woodwork (stairs and skirting) are painted Farrow & Ball “Off-White”, and the walls are a light sandy colour called ‘String’ again by Farrow & Ball. I don’t actually have a ‘white wall’ in the house to use for this, and my wife won’t have one!

The LR35R runs on two 21700 cells which can be recharged in the light.

Please note, all quoted lumen figures are from a DIY integrating sphere, and according to ANSI standards. Although every effort is made to give as accurate a result as possible, they should be taken as an estimate only. The results can be used to compare outputs in this review and others I have published.

Before getting onto the output graphs, let’s quickly look at the USB charging graphs. Fenix have use a pulse charging approach which the three images show clearly. Peak charging current is 3A. 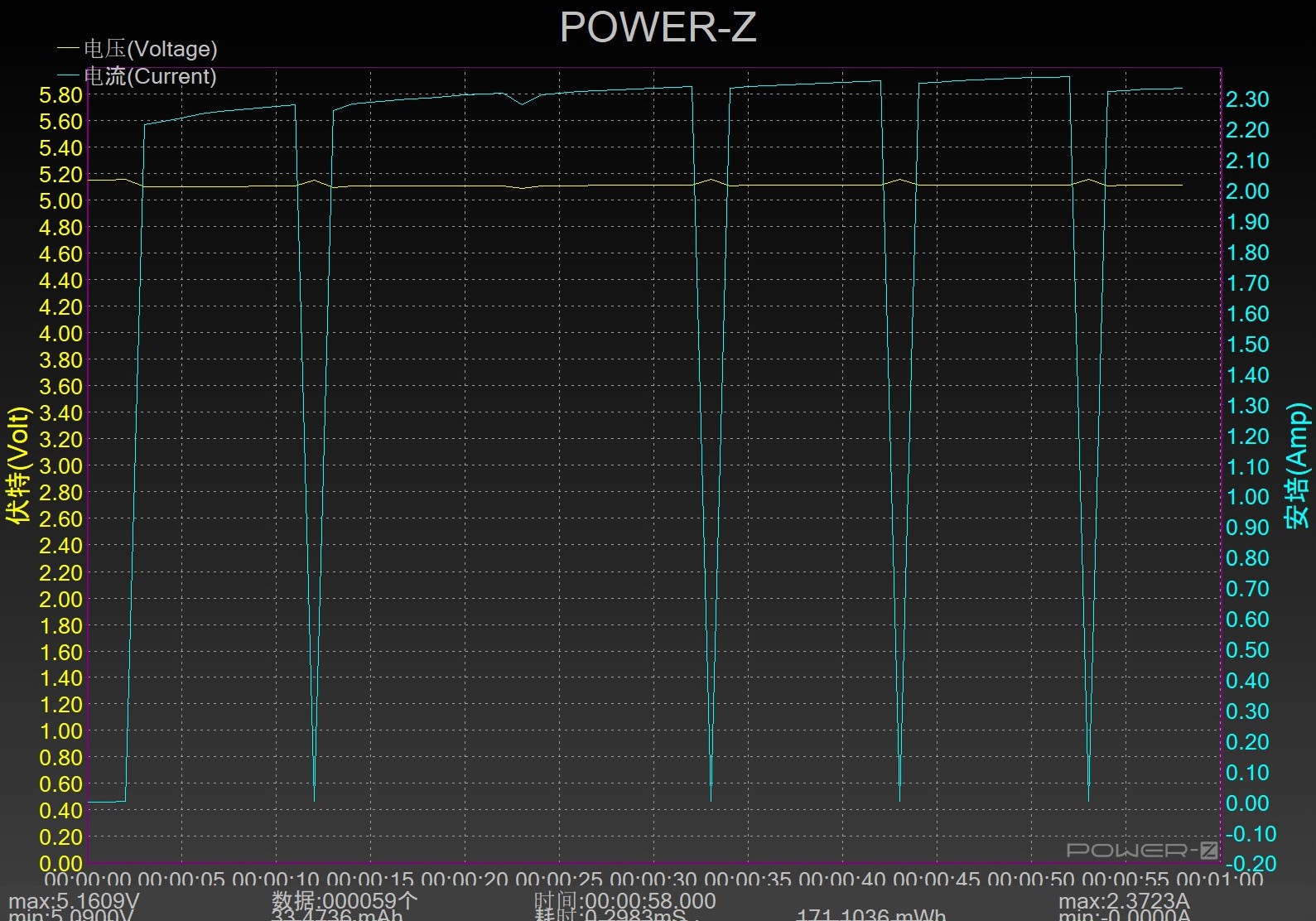 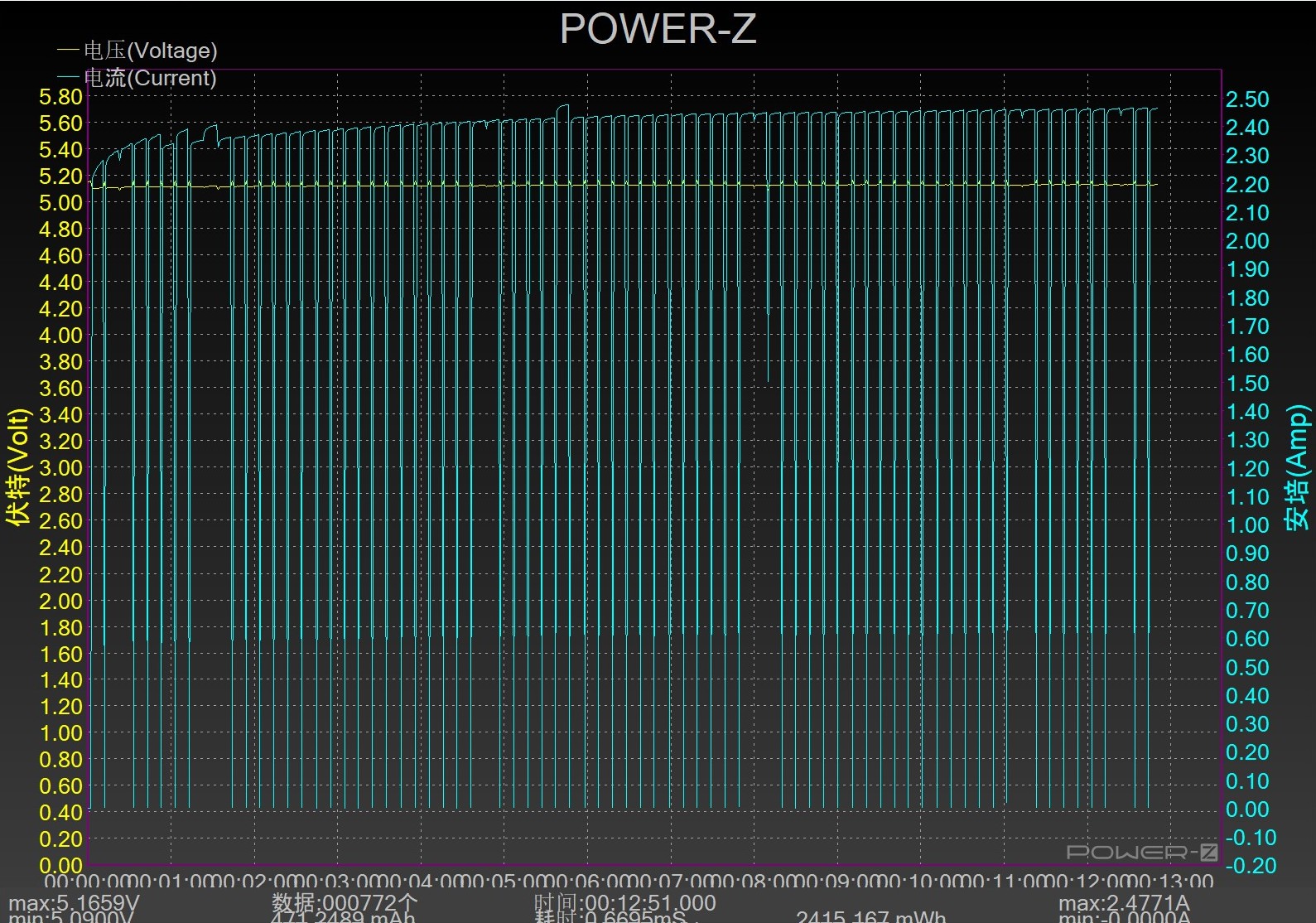 And the three runtime graphs which show the effect of the thermal regulation, and how this is countered with stronger cooling. 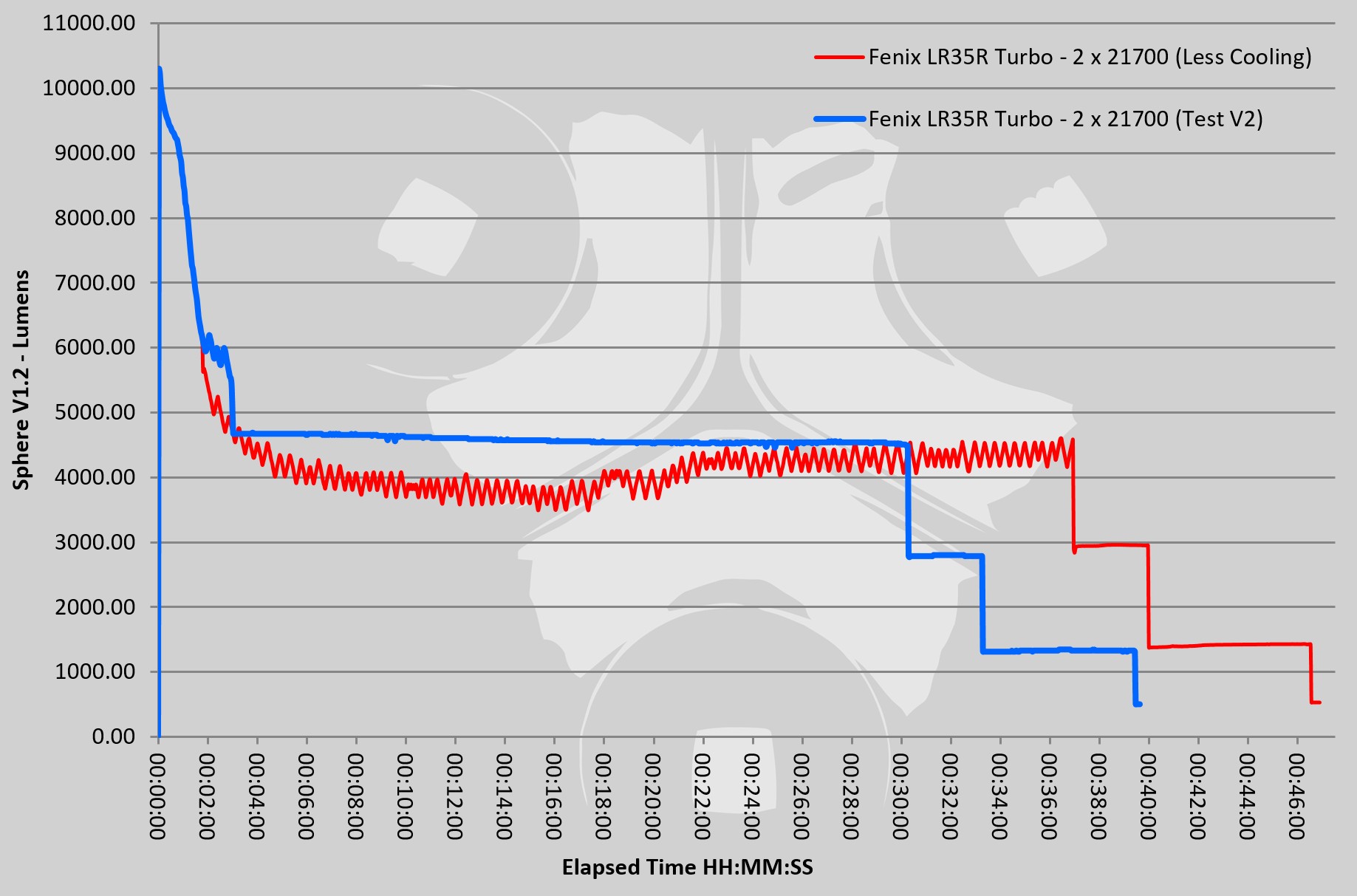 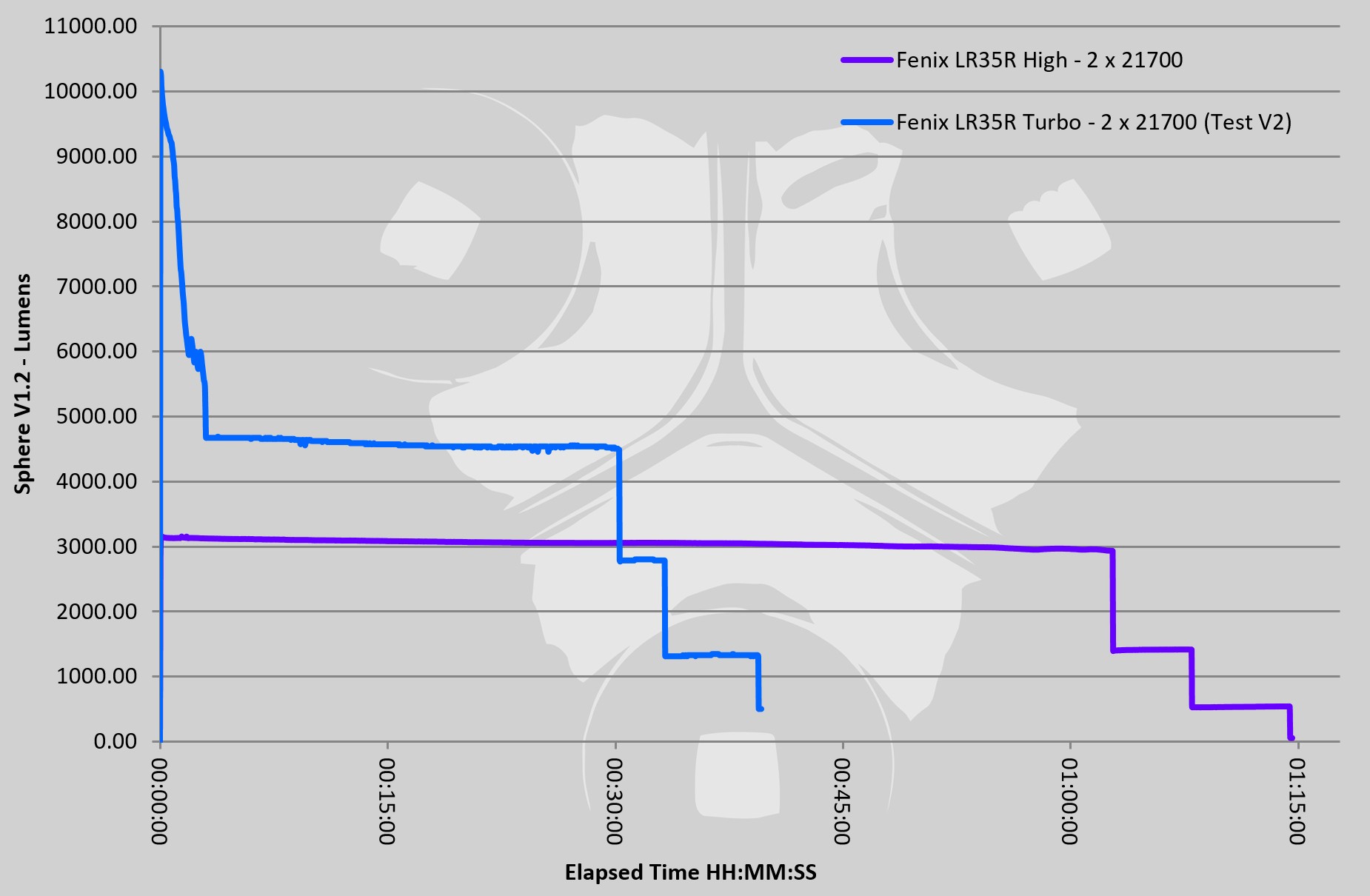 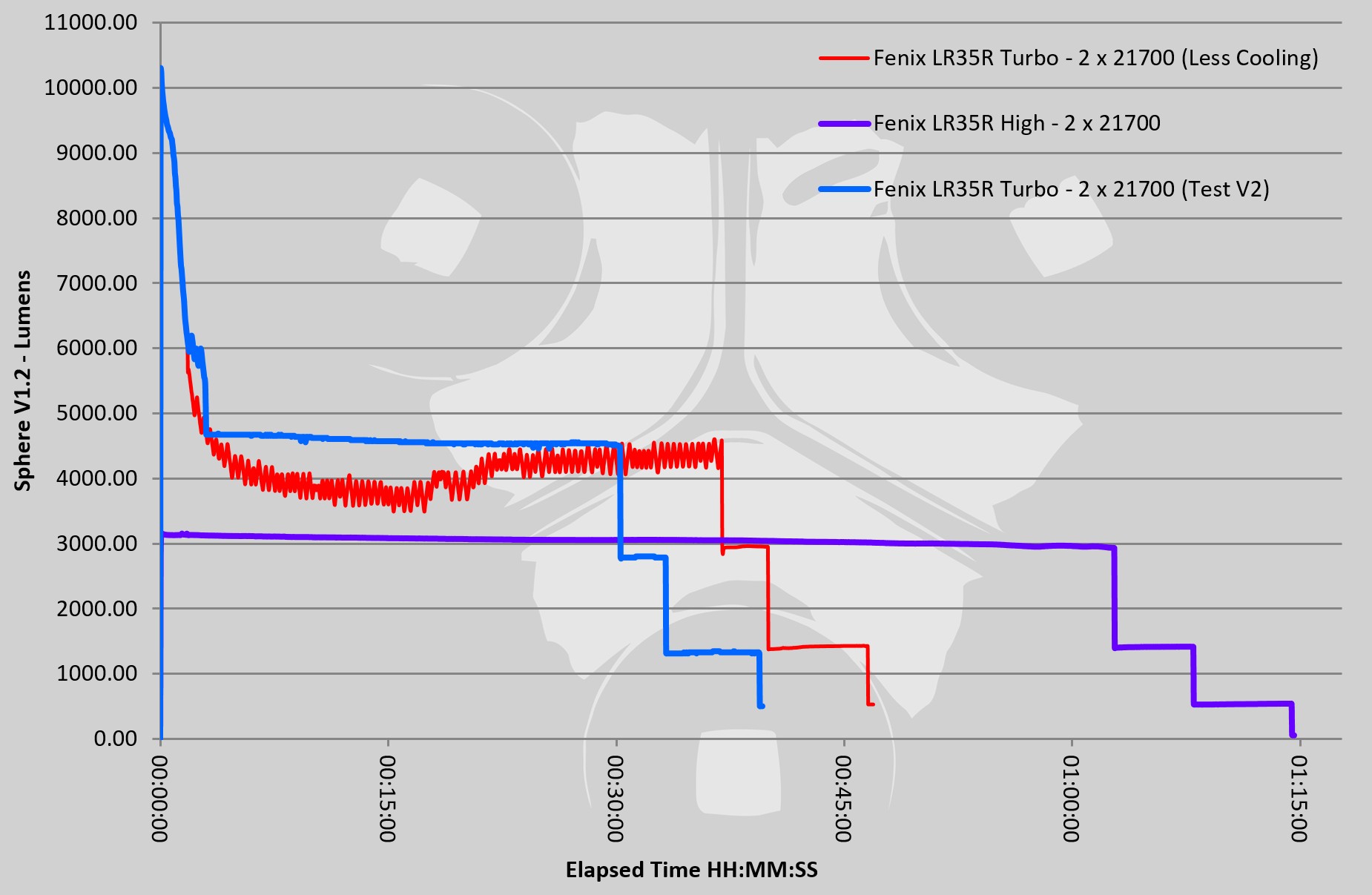 A thermal image taken during the runtime testing. 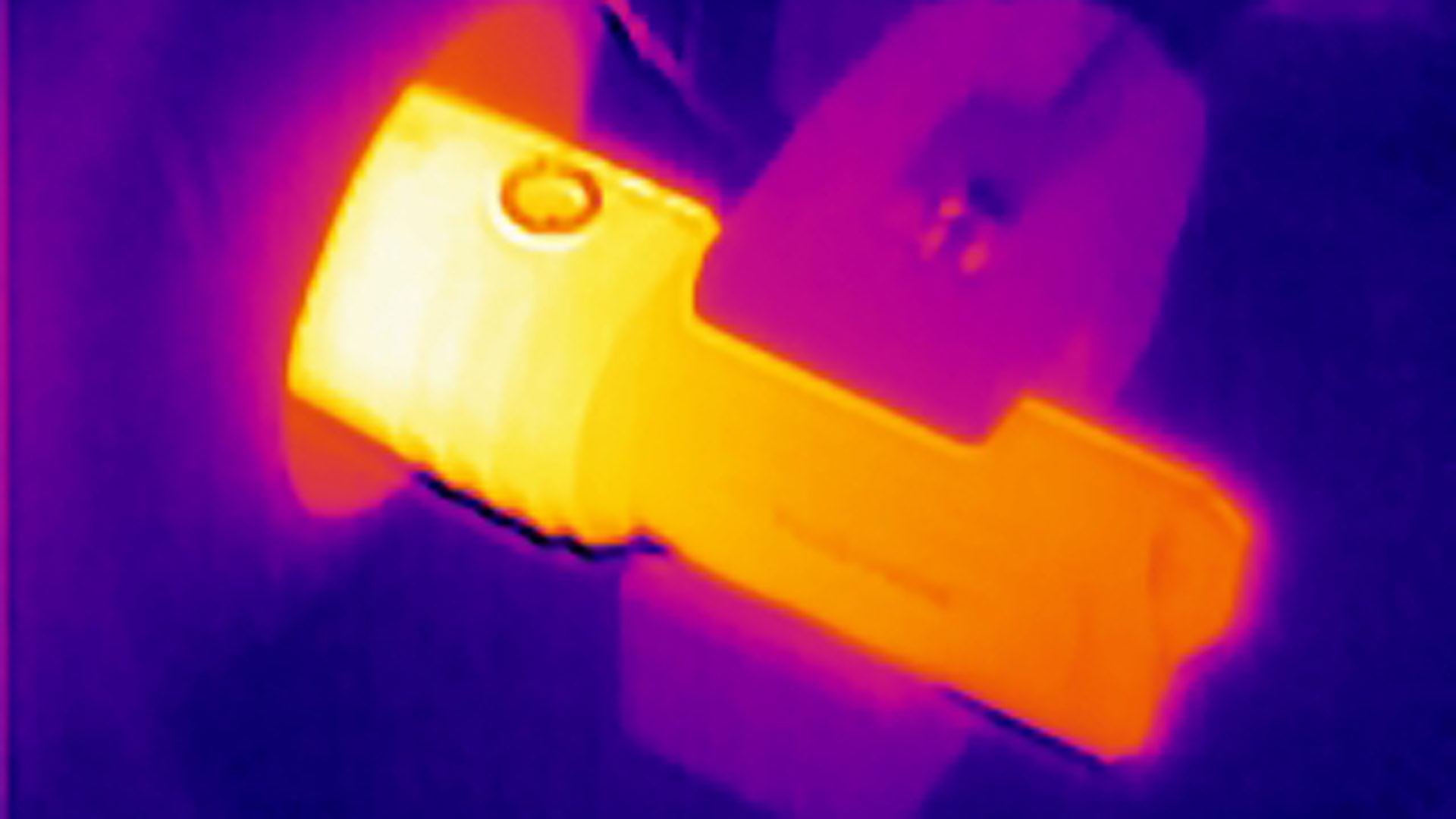 A real surprise that this output can be achieved in a light smaller than one of my old favourites, the TK35. It does heat up very quickly, and in normal use, hand held, the thermal regulation kicks in much faster than on the runtime graphs which had strong cooling.
The built in charging is very useful, especially as all the 21700 rated chargers I have would not take the long Fenix 21700 cells. It also means you don’t need anything else, and can swap the cells if needed.
As the LR35R is so small, I really wish Fenix had added a lower sub-lumen mode, as for me that would make it a fantastic all-rounder.
Be aware that the headline 10,000 lumens is only short lived, but if you take it down a notch or two, the performance is very very strong.
Beam tint and beam profile are very useable, and overall this is a powerhouse that is easy to live with. 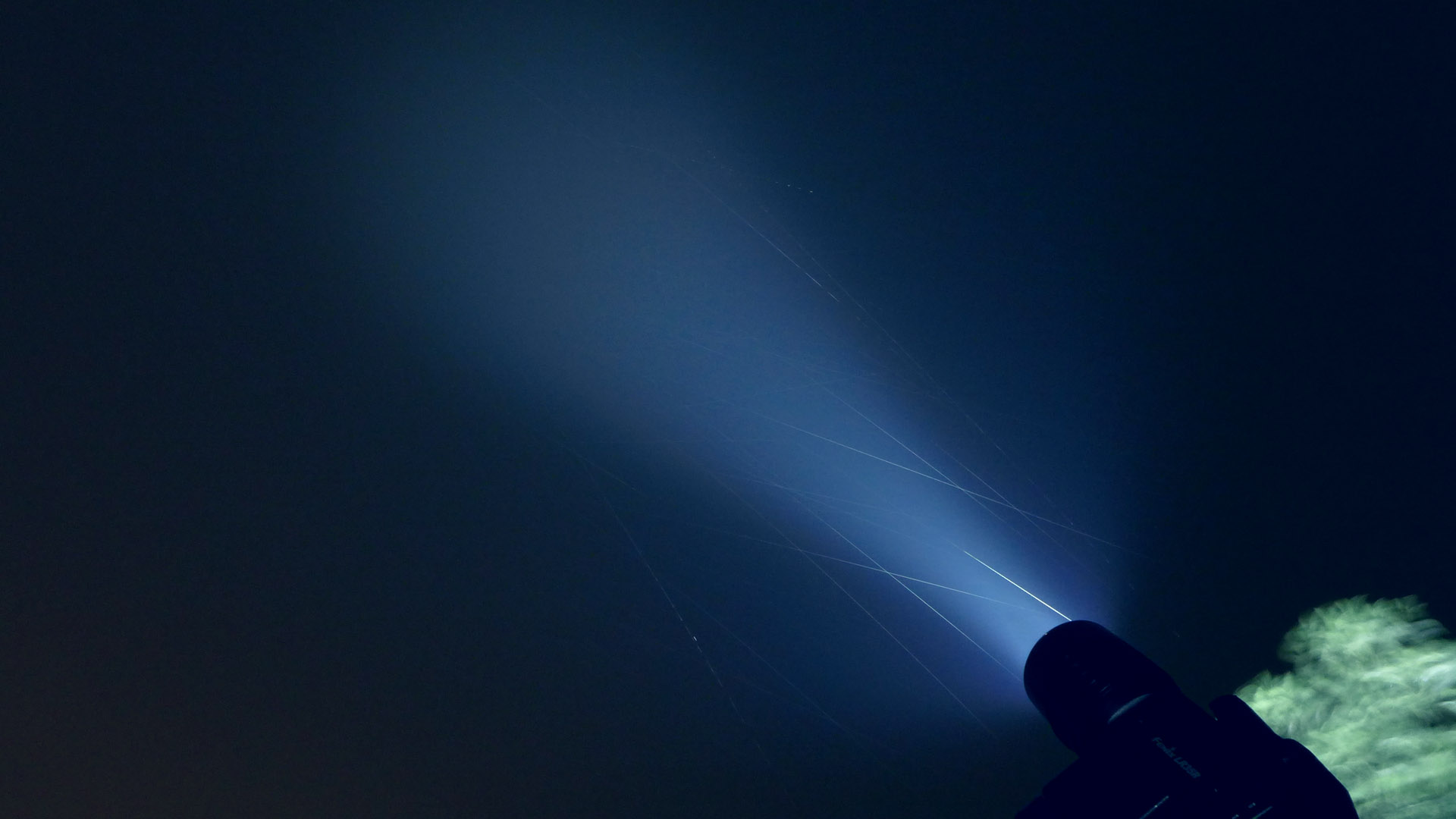 Review Summary
The views expressed in this summary table are from the point of view of the reviewer’s personal use. I am not a member of the armed forces and cannot comment on its use beyond that covered in the review.

Something that might be a ‘pro’ for one user can be a ‘con’ for another, so the comments are categorised based on my requirements. You should consider all points and if they could be beneficial to you.

E28R - The Most Powerful EDC Flashlight